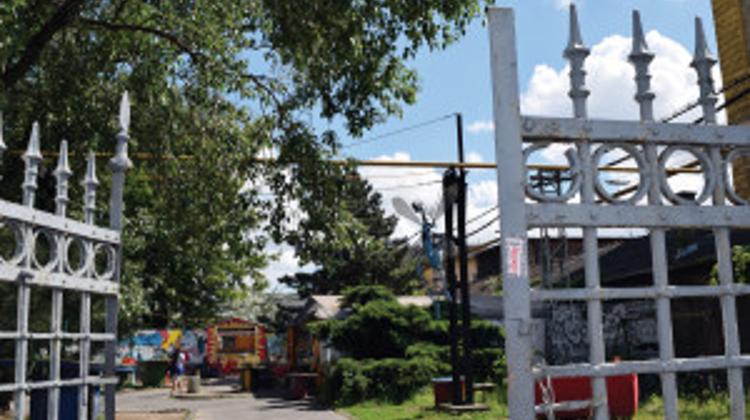 Cultural meeting point R33 reminds us of an integrated beer garden and club from the alternative scene in Berlin, but it’s more original because the R33 Organisation unites not only the arty happenings in District IX but this is also a place for party people and snack lovers.

The sun is shining on the beer garden and the R33 building. There is hardly a wall not decorated with graffiti. About a year ago they had a competition in their garden, following which the owners integrated some of the art objects into the furniture.

Tamás Lőrincz, the manager of the underground cultural centre, as the owners describe it with a wink, built sofas from pallets and used worn-out cable drums as tables. A colourful mix of old armchairs and sofas stands under a tent-like creation.

“We made the furniture ourselves from pallets and tyres,” Lőrincz says. “We got the used armchairs and sofas from a friend who works at a garbage collection plant.” In co-operation with R33 his event company called “Burg R33” organises events both inside and outside this location.

There is free Wi-Fi, so if you like being outside you are welcome to get comfortable and work on your homework or projects. The garden becomes a popular bar with concerts and club events in the neighbouring building only in the evening.
“The R33 is a different kind of alternative and cultural meeting point,” Lőrincz explains. “We have been here since the last five years on the territory of the old slaughterhouse at Soroksári út. The R33 Organisation had been already set up for four years back then.”
The old slaughterhouse was bought for a symbolic coin after the political turn. “Our premises serve another purpose as well,” the manager says. “Artists are renting workshops in the upper floors of our building, we have a professional sound studio available for musicians, and there is another room that is regularly used by theatre and dance groups.”

The land can be rented for events and photo shoots as well. The founders of the R33 Organisation, the siblings Tibor and Gábor Perecsènyi, deliberately wanted to create a place for creative exchange and to support artists right from the beginning.

39-41_r_etterem6However, the R33 is most known for the long and intensive party nights – it’s especially popular because of its goa, reggae, rock and techno events. The bar in the garden of the club offers beer, alcoholic drinks and soft drinks too, during the week they serve burgers, hotdogs, French fries and sandwiches between 3pm and 10pm, and on weekends the offer stands as long as the stocks last.
Their plans for the future are to broaden the food. “Our specialty is the Nyiregyházi, which is a kind of gyros grilled in bread with onions, tomatoes, chicken and sour cream,” Lőrincz says. This was the first dish they offered when they started selling snacks.
He used to sell snacks from a bus during the parties but today there is no longer a bus because the Perecsényi brothers built a small snack hut to replace it last year.
“It is our tradition that anyone who would like to can come to cook together on Wednesdays before the usual weekly goa party,” Lőrincz adds. “Of course, we are not able to cook for all of our guests, since we have 250 on average each night. However, we do what we can.”
Entry to the beer garden is free and there is a HUF 2000 to 3000 fee for parties. This is somewhat above the average but they do redesign the decoration each time.