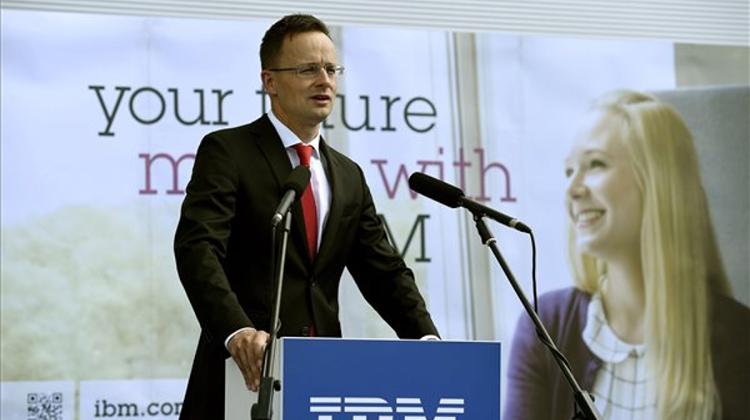 IBM will enlarge its Székesfehérvár IT service headquarters with an investment worth HUF 3.2 billion, and based on an individual decision, the Government will provide HUF 1.1 billion for the project. As a result, 410 new jobs will be created, the Minister of Foreign Affairs and Trade announced on Wednesday in Székesfehérvár.

Péter Szijjártó said that the company will provide information technology, procurement, laboratory and training services in its significantly enlarged Székesfehérvár unit for more than 300 Western-European businesses. He indicated that degree-holders will account for 40 per cent of the necessary new work force.

The Minister takes the view that, in the wake of this project, Hungarian-American economic cooperation will further improve, which is a success story as the United States is the most significant investor, after the European Union, today. There are more than 600 US businesses in Hungary, providing jobs for over 100,000 people, and the total worth of their investments is in excess of USD 9 billion, he added.

The Minister pointed out that IBM’s development will further reinforce the local infocommunications and telecommunications sector, the production value of which exceeded HUF 1,000 billion in the first quarter, and this represents an 8 per cent increase compared with last year’s corresponding period. He remarked that some 196,000 people work in the sector today.

Mr Szijjártó highlighted that there is a new world order in the making where there is a keener than ever struggle for projects which create new jobs. At the same time, security has become a new constituent of competitiveness: the ability of a given country to guarantee the security of investments, he said. Guaranteeing security is the Government’s most important goal, he added.

Hungary is a safe and secure place today, and this is also testified to by the fact that investments were brought to Hungary last year in record numbers, the Minister said. He pointed out: we are at present at the top of the rankings in Central-Europe as regards the ratio of direct working capital present in the country to the country’s economic performance.

Deputy-Mayor Attila Mészáros (Fidesz) said: the city’s economy is expanding by 15 per cent annually, and IBM, too, contributes to this growth. In his view, this indicates that there is steady confidence on the part of Hungarian SMEs and international working capital in the city of Székesfehérvár.

Zoltán Zerényi, head of the IBM Client Innovation Centre stressed that they have been able to rise to challenges continuously in the past 19 years. They are proud of their employees who provide services of extremely high quality to customers around the clock on the widest possible scale of services.

He indicated that, as another milestone of improvement and development, they have forged closer cooperation with higher education institutions, and as a result, they will employ another 25 students as of September within the framework of dual training in the field of IT. In consequence, IBM is now the largest dual training provider in IT in Hungary.

The executive pointed out that it is their mission to rise to the challenges of the market with human resources and financial services, server production, market IT solutions and video streaming services. They wish to retain their leading role in the market also in the future, Mr Zerényi said.