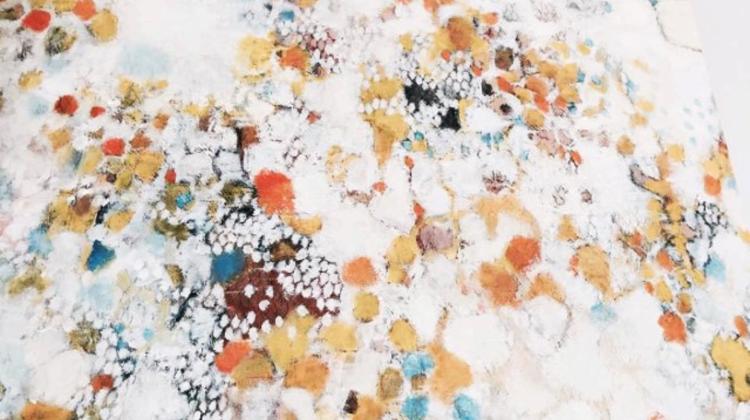 Budapest Art Factory is pleased to announce the solo exhibition of New York based Korean guest artist, Hosook Kang, who was invited to participate in the artist residency program in August and September, 2016. The vernissage of the show titled In Light takes place on Wednesday, September 14, 2016 from 6 to 9 pm. at the Project Space of the studio complex.

The evening will also give visitors the opportunity to view the studios of Dóra Juhász, Márta Kucsora, Sándor Szász and New York based photographer Liz Nielsen, invited guest artist, who develops a new body of work within the residency program.

Hosook Kang’s vigorous acrylic paintings depict configurations of nature in a delicate fashion. Her compositions are a synthesis of a gentle background, constructed by abstract layers of veil-like structures, and repetitive, meticulous patterns of dots that suggest the persistence of movement. While the varied hues and luminous particles burst with energy, their interplay carries traits of meditative character at the same time.

The subject of her body of work references Korean artistic manifestations – the motifs, mysteries and transformations of the natural world – which are created by applying the visual language of contemporary Western culture.

Kang made her mark by creating this union of Eastern and Western influences in which the phenomena of beauty prevail eternally. In the exhibition In Light, Kang experiments with the medium of oil as well to present a series of smaller scale works evoking natural formations.

The daytime and nighttime views of Budapest, the natural and artificial light that penetrates the inner yards and glows through several materials were captured with tones ranging from white to golden shades, while displaying the rhythmical change of color effects.

Hoosok Kang was born in 1960 in Daegu, Korea. She finished her studies at the Seoul Women’s University (BA), the Keimyung University, Daegu (MFA) and the Pratt Institute in Brooklyn where she studied painting. Her professional experience also includes teaching; in the period 1999–2003 she held the position of instructor at the Department of Fine Arts, Keimyung College.

The art of Kang is exhibited on a regular basis; she has shown her work at Gallery Korea of the Korean Cultural Service New York; Nabi Gallery, New York; Phoenix Gallery, New York; and Daegu Culture and Arts Center, Korea among others. She is currently based in New York and is represented by the Sundaram Tagore Gallery which operates in New York, Hong Kong and Singapore.