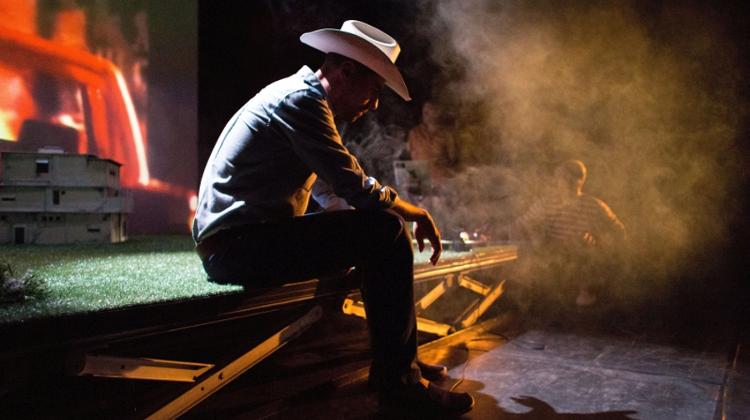 The house where Geronimo is hiding in Pakistan. An exact copy of that house in a military base in North Carolina. A third twin house in Jordan, where a film is shot. The largest manhunt in history. A Sheriff obsessed with a white whale. The boy band Take That drilling for a historic mission. Cowboys and Indians. Airplanes and beers. Copies, reflections, imitations and cheeseburgers.

Through its trademark language (scale models, video projections, video editing in real time and willing performers) Agrupación Señor Serrano presents a scenic western where reality and its copies are mixed, drawing a merciless pop portrait of the decade following 9/11, the seed for the 21st century.
The context

Geronimo's house had three floors, two large courtyards and a small guest house. The whole compound was protected by a three-meters-tall wall. Geronimo lived there with his family.

Geronimo's house had three floors, two large courtyards and a small guest house. It was protected by a three meters wall. It was 15,000 km away from the first house and Matt Bissonnette and his Navy Seal’s colleagues were training there for several weeks.

Geronimo's house, identical to the previous two, was halfway to the first and the second. There, the actor Chris Patt and his colleagues were playing Geronimo, Matt Bissonnette and the Navy Seals.

The first house was built in Abottabad. The second, in Harvey Point military base, North Carolina. And the third was built by Columbia Pictures in Jordan, near the Dead Sea.

Three scale models of the house were built, too. One was built by the CIA to plan and explain the attack on Geronimo. The second was built by the production company of Zero Dark Thirty and was used in the film for the same purpose. The third is ours and it’s on the stage.

In English with Hungarian subtitles.