Introducing Mátyás Pince, One Of The Oldest Restaurants In Budapest 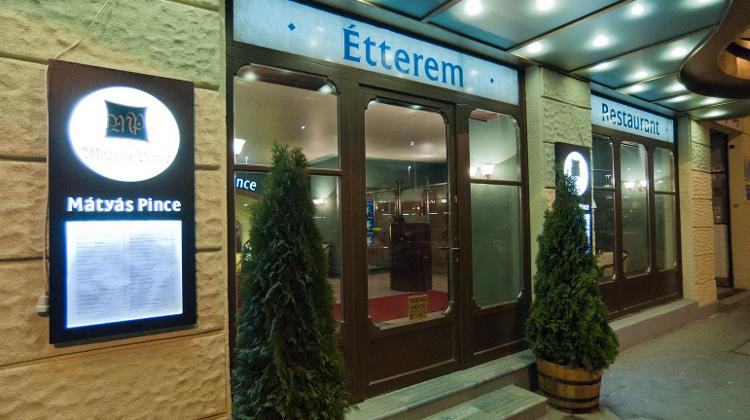 "Due to its style, the Mátyás Pince Restaurant still attracts a lot of foreign tourists, but we would very much like to attract more Hungarian and expat guests too," management told XpatLoop. In the eyes of many, the Mátyás Pince Restaurant is a precious piece of the past. "Our compatriots living abroad come back for nostalgia, and families travel from the countryside for a Sunday lunch because it was once their grandma’s favourite place". However, the place also offers a memourable experience to younger people, and so naturally the venue is keen to attract today’s generation to discover it for themselves.

In 1904, the Mátyás Pince was a tavern with simple food and excellent beers. These days, as part of the 110th anniversary celebrations, they are also offering various programs for younger visitors, and hope that if they enjoy themselves they will come back again another time.

Current day management would like to reinforce the traditional style, and so offer fresh draught beer; homemade-style food, savoury beer snacks and traditional Hungarian food on a pub terrace (open from spring untill autumn). In the restaurant famous traditional hospitality is in focus.

The Mátyás Pince is one of the oldest restaurants in Budapest, and this means it has a few obligations. For example once dinner is over, its time to party with traditional Gypsy music, and even dance.

Vilmos Lakatos and his orchestra often play together with musicians from other genres, but lucky guests might just catch a unique gypsy violin dual, a folklore program or an operetta evening.

The Story behind: Matthias, Tercsi and Mátyás

Pince Mátyás Baldauf was born on 10 January 1873 in Borostyánkő (today Bernstein, Austria). His parents were farmers. At the age of thirteen, the young boy sets off to work in nearby Felsőlöv (Oberschützen), becoming a waiter’s apprentice at the Hotel Friedrich, which also has an excellent restaurant. Here, he also learns the art of the kitchen butcher. The next stop is Graz, and then Vienna.

It is with extensive professional experience that he later migrates to Budapest, where he works for a short time at the Green Tree in Buda, after which he begins working at the Piszkos beer house. Terézia Antunovics was born in Érd, near Pest, on 11 October 1879. Her ancestors migrated to Hungary from Fiume (now Rijeka, Croatia). We don’t know how the feisty, petite girl came to work at a confectionery in Pest and then became the waitress at the Piszkos, only that this is where they fell in love and where their busy and laborious life together began.

They were married on 15 May 1900 at the evangelical church on Deák Square, where the young groom later became a parson. The couple had three girls and three boys: Ilus, Zia, Tili, and then Matyi, Ernő and Imre. But life always has its twists and turns, if not tragedies. Matthias’s brother, Laci, married Tercsike’s sister, Lujza, who died after giving birth to their third child, following which her husband had a fatal nervous breakdown. The Baldauf ’s adopted the children, adding Béla, Feri and Laci to their family of six.

"She was a wonderful example of the clever, hard-working and honest women of Pest in that time… kind to everyone, attentive, diligent and untiringly agile”, a chronicler wrote of her. But the „hulking and good-natured Mátyás Baldauf also got a few stares when he threw the heavy beer barrels onto the trestle with consummate ease to have them tapped.”

At the foot of the new and graceful Elisabeth Bridge, there were several new houses and many doors and windows were adorned with advertisements: apartments, shops and cellars to let… They rented the cellar on the corner of Eskü Square* at 1500 forints-a-year.

So what happened to the Mátyás Pince Restaurant? It was closed and given to the National Consignment Store − as a furniture repository.

This is when Endre Papp (1920-2008) arrived on the scene. His forefathers had been in the catering business for six generations. In 1938, the family’s restaurant, the Halásztanya, which was designed by Károly Kós and still stands today, was opened on the main square in Kispest; it could accommodate 1500 people. It took less than ten years for all of the family’s hopes and invested money to crumble into nothing: the decree concerning the nationalisation of the restaurant arrived on 23 December 1949, as a Christmas present from the state.

They could take away his house and his money, but not his knowledge. Endre Papp was placed at the head of the dying Mátyás Pince in May of 1950. He managed it for thirty-three years, he could be equally proud of the fact that he had waited on Nixon, Khrushchev, several members of the Kennedy family, François Mitterrand, and many other celebrities.

He began the task of refurbishing the ruined restaurant with seven employees. He decided to convert the Mátyás Pince into a fish restaurant − for the simple reason that meat was only available in exchange for food stamps, if at all, while no stamps were needed to procure fish.

While under the Baldauf’s, in addition to Tercsi’s charm and the excellent beer had been the main attraction, as a born caterer, Endre Papp concentrated on the kitchen. A host of new creations can be attributed to him, including all kinds of foods that are full of Hungarian flavours but which are less spicy and fatty. After the revolution of 1956 tourism slowly began to increase.

Although most of the guests still came from Budapest, more and more foreigners frequented the Cellar, including large groups of guided tourists. This was too much for the small kitchen and it had to be expanded. On 24 February 1959, on Saint Matthias’s Day, Endre Papp convened the Friends of the Mátyás Pince society. Its founding members included famous intellectuals, actors and actresses such as thespians Manyi Kiss, Hilda Gobbi, Ferenc Bessenyei and Ferenc Kállai, or professors of medicine Antal Babits and László Zoltán.

The Matthias Day dinners became a tradition that lasted for decades. The restaurant was reconstructed again in 1964: the whole area was dug up because of the reconstruction of Elisabeth Bridge, this is when the foyer was built in the restaurant. It would have been nice to expand the kitchens too, but there was no room. Next came the refurbishing of the interior in 1969-71: the frescoes were cleaned and restored and Gyula Bozó created new wall paintings for the beer hall.

The Hungarian restaurant at the 1958 World Exhibition in Brussels was a resounding success and the Vienna public were able to enjoy Endre Papp’s cuisine, and the gypsy music of the nine year-old Sándor Lakatos in 1962, but it was a while before a permanent restaurant was opened in 1972.

The history of the Vienna, and later Munich, Mátyás Pince’s deserve a separate publication, just as a novel could and should be written about the restaurants’ famous musicians. Because the wonderful gypsy music has always been and remains to this day an important reason why the establishment continues to be very popular.

Sándor Déki Lakatos Sr. played violin in the Mátyás Pince Restaurant from 1965, and his son Sándor Jr. from 1972 until 2011. They were members of one of Hungary’s oldest musician dynasties: the first written mention of their oldest known ancestor dates back to 1630.

The father was the founding first violinist of the Hungarian Radio’s folk orchestra and the first gypsy musician to receive Hungary’s most prestigious musical acknowledgement, the Liszt Award. His son was later also presented with this award, as well as receiving the Knights Cross of the Order of Merit of the Republic of Hungary.

The current head of the orchestra, Vilmos Lakatos, holder of the Silver Order of Merit of Hungary continues the musical traditions of the Matthias Cellar that now go back some sixty-five years. Large-scale celebrations were held in 1979 to mark the restaurant’s 75th anniversary.

The first candles on the three-tiered cake were lit by the son of the original owner, Mátyás Borostyánkői.

A pretty commemorative booklet was published on the 100th anniversary of the opening of the Mátyás Pince, and who else could have written and designed it than Mátyás Borostyánkői the younger and youngest, the architect grandson and graphic designer greatgrandson of the restaurant’s “founding father”.

The team of Mátyás Pince Restaurant is planning a festive program series on the occasion of 110th anniversary of the restaurant’s opening. The goal is to present a new path of the Mátyás Pince with respect of traditions. In addition to the reminiscent culinary and musical programs there will be attractive elements appearing for younger people as well.