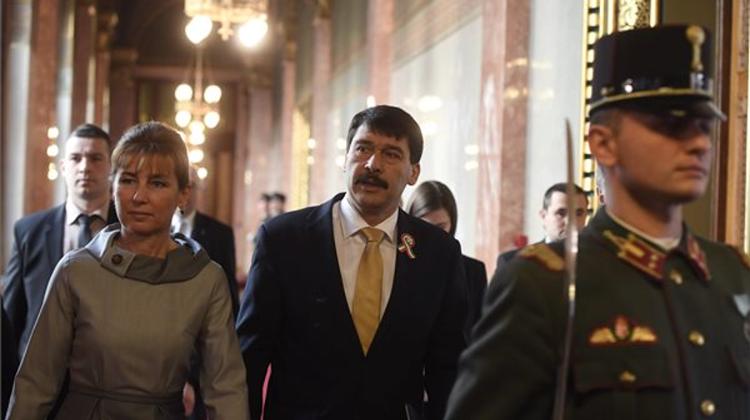 Neither of the two candidates in the presidential election in parliament could secure a two-thirds majority on Monday morning, which rendered the first round of the election inconclusive.

Áder calls for making performance “central theme” In his address, delivered before parliament’s vote on Hungary’s president for the next five-year term, Ader repeated his vow made in 2012 to always represent Hungary’s interests and values, and said he would continue on basis of those values.

Áder noted the responsibility he felt for future generations and the natural environment as a top priority in his presidential work. Concerning the latter topic, Áder noted that “political negligence” concerning the environment characterised “nearly” all countries across the world.

He pointed to the unprecedented exploitation of resources and a simultaneous increase in greenhouse emissions.

Concerning his diplomatic efforts during his term, Áder mentioned his talks with Tomislav Nikolic, his Serbian counterpart, in 2012, which led to the Serbian parliament’s condemning anti-Hungarian atrocities at the end of the Second World War, and Serbia’s annulling an 1945 decree on the collective guilt of ethnic Hungarians.

Referring to next year’s parliamentary elections, Áder quoted 19th-century Hungarian poet János Arany as saying “…if I refuse to contribute to the homeland as much as I can, it is as if saying I want for there to be no Hungary. But if there is no homeland, we will not be ourselves, either; the question is: do we want the homeland to prosper or not?”

Commenting on the speech, the opposition Socialists said that “Áder has proved his incompetence … and does not have a clue” about the situation in Hungary. In their statement, the Socialists condemned Ader for “failing to talk about poverty and considering it more important to praise Hungary-Serbia ties instead”.

“Áder did not talk about 4 million people under the poverty line, but voiced concern for climate change,” nor did he speak about Hungary’s ailing education or health, the statement said. “For Ader there are no hungry children, no corruption, and the rule of law is not in jeopardy,” the Socialists said.

Majtényi: Aim is to “restore republic” In his speech before the presidential vote, Majtényi said he wanted a constitution sanctioned by a referendum, one that expresses the common values of rival groups of society and fosters peace.

He called for a free and inclusive Hungary where solidarity has a much greater role than the state. The former ombudsman for data protection called poverty “appalling”, and corruption “all-encompassing”.

The only antidotes to the greed of the powerful, he said, are the independent institutions. Concerning migration, Majtenyi said that “the only policy acceptable by moral and constitutionals terms is the one that grants as much dignity to those fleeing their homeland as ours, and meets the moral and legal requirements of humanity.”

Majtenyi said that one should never give in to depravity, corruption, intimidation and environmental destruction. Majtenyi said that as president, he would make use of his right to submit bills directly to parliament, and would follow in the steps of former presidents Árpád Göncz and László Sólyom in representing authority and integrity.

As president, he would first submit a bill regarding freedom of the press, he said, In addition, he suggested new legislation regarding the Constitutional Court, social services, public and higher education and the fight against corruption. First round of presidential election inconclusive.

The results of the presidential vote are expected to be announced between 11.30am and 1pm.

In the second round, held after an interval of 80 minutes, one of the two candidates – János Áder, the incumbent president or László Majtényi, candidate of the leftist opposition – will be elected with a simple majority to serve as president of Hungary for the next five-year term. In the first round Áder garnered 131 votes and Majtényi 44, while 24 lawmakers stayed away from the vote.