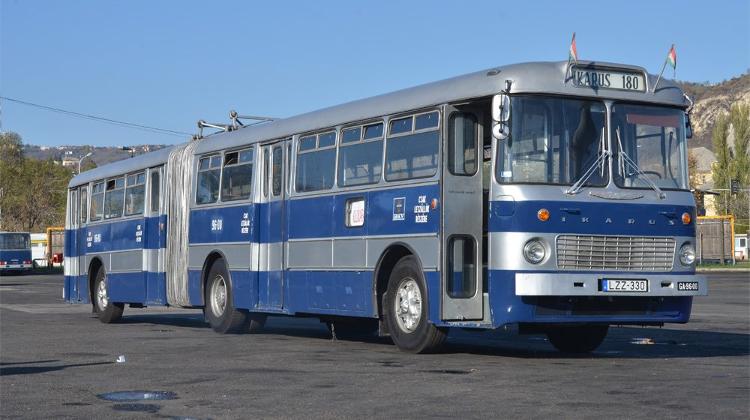 The popular Heritage Transport Services by BKK and BKV are back in operation again from the beginning of May to the end of September 2017. Besides tramlines Duna Heritage and Thermal Heritage and the Snow White vintage boat, operating as line SH, enthusiasts of old times can also enjoy rides aboard the articulated Ikarus vintage bus this year.

The Ikarus 180 articulated bus built in 1970 operates as a regular heritage line from this year and takes visitors on a circle route every second Sunday of each month. The last time the over 16-metre-long bus was in regular scheduled service was in 1980.

The bus was renovated in 2013, and it has carried passengers since then, but this year it is running as a scheduled transport heritage service. The vintage bus is operating as line BH from Deák Ferenc tér via Ferenciek tere-Erzsébet híd-Lánchíd utca-Bem rakpart-Margit híd-Bajcsy-Zsilinszky út-Deák Ferenc tér.

The Duna Heritage tram (DH) is running between Közvágóhíd H and Jászai Mari tér on Saturdays, on the route of tramline 2 which was chosen as one of the 10 most beautiful tramlines in the world. The line, established after World War II, runs from Jászai Mari tér along the upper embankment in Pest, via Kossuth Lajos tér then passing under the Chain Bridge, it reaches the Danube Promenade.

Both during the daytime and after sundown, this line offers sweeping views as riders get to admire the unique building of the Hungarian Parliament and the Danube Promenade with its row of hotels from up close along with the beautiful panorama of Buda with the images of the Fisherman's Bastion, Matthias Church and Buda Castle reflected by the Danube.

Budapest is the city of baths with many medicinal hot-springs on its territory, whose waters are used by the capital’s popular spas. On Sundays, travelling by the Thermal Heritage tram (TH) on a circle route on the interconnected tram network in Buda via Szent János Kórház–Rudas Fürdő–Szent Gellért Gyógyfürdő– Lukács Fürdő–Szent János Kórház, passengers get to see several baths that are also historic monuments. On this line, nostalgic transport fans can admire the panorama of Pest boasting the majestic Parliament building.

Departing from Szent János Kórház (hospital), the tram reaches the famous Rudas Thermal Bath, from where it runs in parallel with the Danube, then passing underneath the Elisabeth, the Chain and the Margaret Bridges it arrives at the Lukács Thermal Bath. By presenting their commemorative transport heritage tickets, passengers get a 10% discount off the daily entrance fee to the Lukács or the Gellért Thermal Baths. For more information visit spasbudapest.com

During the 45 minutes of the journey on board the Snow White vintage boat, passengers have the opportunity to view the glorious panorama of the banks of the Danube, which are a part of UNESCO World Heritage.

The Snow White is one of the last representatives of the still operating, classically built ships of the 19th century. The hull was built in 1895 at the Schoenichen- Hartmann Shipyard in Újpest.

Tickets and daily travelcards can also be obtained from heritage transport staff on board. Boat tickets, purchasable in advance and also sold by the crew, are required for the heritage boat service. For more information about heritage services, routes and vehicles, please visit bkk.hu/heritage.