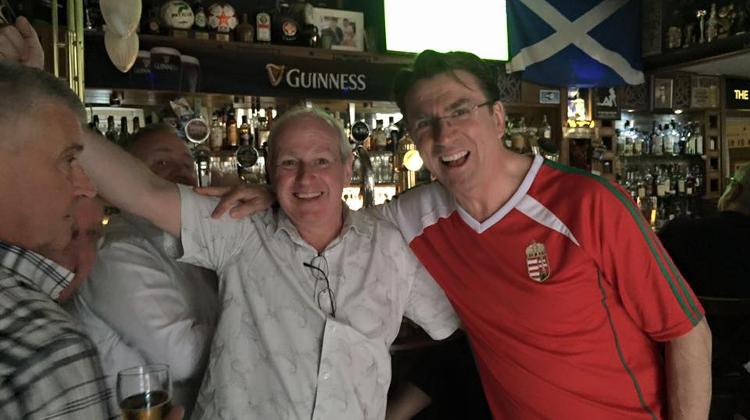 One year after a stroll through the Grassmarket in Edinburgh, Patrick and Zsuzsanna embarked on another journey together as they opened the doors to The Caledonia in the heart of Budapest on 1 September 2006. Here's a Q&A about what happened to them from then on, right up to the recent sale of this popular community watering-hole.

So 'The Cali' had arrived and expats, locals and tourists have all revelled in the unique ambience there for over a decade. Earlier this month Patrick and Zsuzsa made the "difficult decision" to pass on the reins to a Hungarian family, led by András (Andrew in Scottish, notes Patrick).

XpatLoop has been pleased to work with the team at The Caledona from the very outset, and so we wanted to catch up with Patrick and Zsuzsa after they officially announced the sale of this expat venue.

XL: Can you remember your first customer?

P&Z: Yes, Ken was the man running Budapest Celtic at the time. We opened the doors and he walked in with his girlfriend. He wanted to discuss whether we were intested in becoming the pub sponsor for Budapest Celtic. It was a match made in heaven and we’ve been proud sponsors for 10 years now.

XL: You’ve had a lot of celebrities visiting you over the years, did you ever get star struck?

We treat them like any other customer, but we also like them to be allowed space and time to just relax and enjoy themselves. I (Zsuzsa) took the telephone booking for Jason Statham. He wanted to watch some boxing with some friends. He explained that he didn’t mind people asking for photos before the boxing. But wanted to be left alone when the boxing started. I had no idea what he was talking about. I told him our customers don’t bother people. They are very nice.

XL: Over the years you have both got involved in a lot of charitable work and community initiatives. Was this always part of the plan ?

P&Z: We always wanted to give something back to the community and to work with our customers to help people less fortunate than ourselves.

We were very fortunate to have so many customers that shared that aim. People at The Robert Burns International Foundation, The Irish Hungarian Business Circle, Gift of the Gab (the great Mary Murphy), the St Andrew’s Night (with Duncan Graham) and of course XpatLoop. So many individuals have helped. It would take pages to list them all. But we remain very grateful as do the people that we have all helped.

XL: We recall a story about beach volleyball that went very wrong?

P&Z: This is one of those stories that form part of the folklore of The Caledonia. We had taken a telephone reservation for 20 people. Under the name of the Hungarian National Female Beach Volleyball Team.

Some of our male customers were very excited and for a Tuesday night we got quite busy as news spread. But we didn’t realise it was a team reunion from the late 50’s. Some of our customers still think we set them up.

XL: And what of the homeless person who was locked in the pub overnight ?

P&Z: That was a lesson learnt. The staff had done all the usual checks when closing. Including checking the toilets. But in between the check and the final closing, a homeless man had managed to nip in for a quick visit to the gents. Only to find himself in complete darkness and locked inside.

The poor man was so scared then next day to assure us the had touched nothing. And indeed he had not. We set him up with some hot bacon rolls and some Irn Bru and off he went.

XL: What advice would you give anyone thinking about opening a bar in Budapest ?

P&Z: Be prepared for a lot of long hours. Try to be around as often as you can to meet and greet customers, new and old. Be willing to try new ideas and organise different types of events. Also get out and about to other networking events. And try to keep hold of your best staff when possible. And check the toilets when closing.

XL: What plans do the new owners have for The Caledonia ?

P&Z: András and Fanny are keen to build on what we have established. They are keen to listen to customers and to meet as many people as possible. They will bring their own ideas to the table and no doubt The Caledonia will continue to flourish.