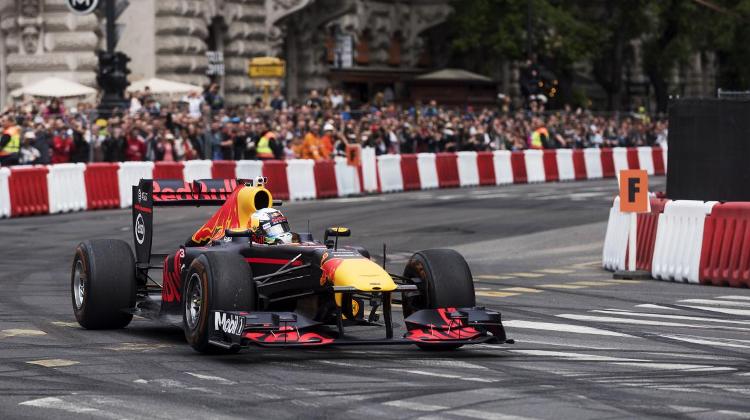 The big race is on Sunday, 30 July, and the 2017 action at Hungaroring is expected to draw a record audience overall, since this year the program is complemented by testing events too – for details and to watch video highlights from 2016 see below.

Those who buy tickets to this year’s Hungarian Grand Prix will receive a two-for-one deal. With their tickets, spectators can watch not only the race on 30 July, but they can also visit the Hungaroring on the following two days which will become a collective test site for the first time in its history.

On 1-2 August the entire F1 field will practice in Mogyoród for the remaining season and for 2018 as well. These testing sessions can also be visited with day tickets.

Among F1’s star drivers, this spring two will also race around Budapest’s streets. Daniel Ricciardo, Red Bull’s driver is a fan of Budapest. As he said, it’s not just the racing that draws him to the city: “I have tonnes of fans here, who always support me at the Hungaroring.” Ricciardo also drove in the Hungarian Grand Prix three years ago when he was the first to cross the finish line.

The Australian driver would like to repeat the feat this year: “I’m not superstitious, but if it comes through, I’ll be very happy, and I’m working on it,” he revealed.Valtteri Bottas, who has also raced the Grand Prix, said: “I’m always happy to come to Hungary, and especially this time, since I’m in the hunt for victory.”

The 27-year-old driver for Mercedes prefers the calm and quiet that is found at dawn in Budapest, and if possible, he’s happy to go for a run along the Danube.Formula 1 began the 2017 season with a new majority owner, which in the interest of more spectacular and exciting races changed a number of regulations.

The teams planned new and faster vehicles in response, as the cars on the whole became larger as the weight limit was raised from 702 to 722 kg. The amount of fuel that can be used was also raised by 5% from 100 kg to 105 kg.

Last year the top layer of the asphalt at the Hungaroring was replaced, with the costs borne by Hungaroring Sport Zrt. under the direction of Zsolt Gyulay, as a result of the company earning profits five of the previous six years.

The latter is popular among local fans because they can root for local driver Norbert Kiss, the two-time European champion.