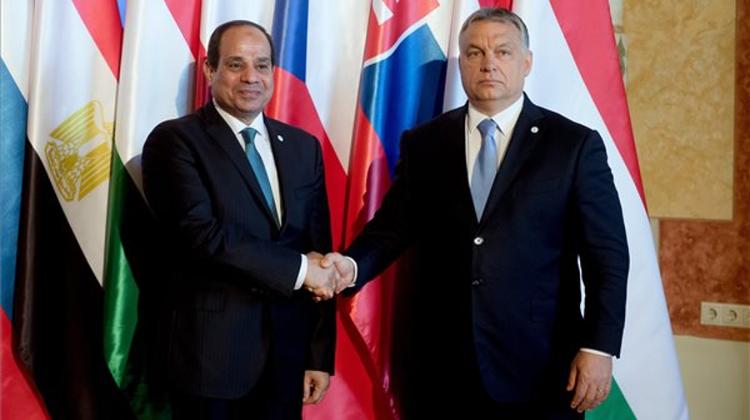 “We are now holding our third business forum and … so far we have not made any major breakthroughs in the two countries’ economic relations,” Orbán told the forum organised by the Hungarian National Trading House (MNKH).

He pointed out, at the same time, that Hungary and Egypt have built a trusting political relationship, which he said was a “good starting point for achieving a major economic breakthrough” through a “wave of projects”.

Speaking about Hungary’s economy, Orbán said that although Hungary only has a population of 10 million, it exports 110 billion dollars’ worth of goods a year.

But now this is less the case after the same target has made its way into the German Christian Democrats’ election campaign platform, he said.

The prime minister said Hungary had developed a “flexible and supportive” policy and approach towards Egypt. “We understand Egyptians’ view that rejects meddling in their internal affairs,” Orban said. He suggested that the European Union should also apply a more constructive approach to the North African country.

Orbán noted the first Hungarian-Egyptian business forum held two years ago prior to the outbreak of the migration crisis, where the two sides had said that a stable Egypt was key to Europe’s stability.

“What I will add to this today is that if a destabilised Syria caused the kinds of problems for Europe that it did, how big would the problems be that would result from an Egypt growing unstable without President al-Sisi leading it,” Orbán said. He said Europe should speak of Egypt and its president with respect and called al-Sisi a “historic figure” for his role in stabilising his country.

On the subject of Qatar’s row with other Arab neighbours, Orbán expressed Hungary’s support for a swift and peaceful resolution to the dispute. Al-Sisi called Hungary and Egypt’s political ties excellent and expressed hope that this could serve as a foundation on which the two countries could build their economic and business ties.

The president mentioned agriculture, industry and energy as sectors in which Egypt hopes to attract foreign investment. Egypt is a stable country whose people want to see rapid economic growth, al-Sisi said, noting that the country had focused on restructuring its economy after the revolution in 2011.