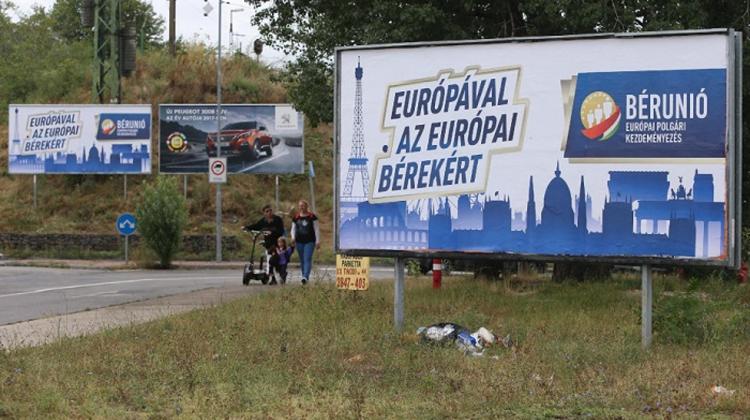 A new wave of billboards has begun to appear on advertising space across Hungary in support of an initiative to equalize wages across the European Union. The media company that owns the ad space will only say the campaign was initiated by a “private person,” but the content of the ads aligns closely with a political initiative sponsored by radical-right party Jobbik.

Meanwhile, rumors circulate that Prime Minister Viktor Orbán is dissatisfied with the efficacy of a law his Fidesz party recently forced through Parliament regulating billboard campaigns, and that the party may be considering ways to close loopholes in the law that still allow for unfriendly political messaging.

Billboards have begun to appear across Hungary featuring the text “Wage Union – European citizens’ initiative.” Two versions of the accompanying text can be found: “With Europe for European wages”, and “Everyone should be able to prosper in their birthland.” No information appears on the ads to suggest any party or organization is responsible for their placement – but their nature and location suggest radical right-wing Jobbik may be behind the campaign.

The concept of a “wage union” was developed by Jobbik at the beginning of this year. The “equal pay for equal work” plan, which aims to reconcile wages in post-communist countries with those of Western Europe, has gathered support from parties, organizations or individuals from seven Central and Eastern European countries. The European Commission registered the Jobbik-sponsored initiative in May, and the party and its allies have one year from August 20 to gather one million signatures in order for the matter to be placed on the commission’s agenda.

Jobbik chairman Gábor Vona argues that while prices in Hungary and other post-communist countries have slowly risen to Western European levels, wages have not followed suit. At a press conference in Miskolc at the end of July, Vona insisted that “everyone should be able to prosper in their birthland” – a message that appears verbatim on the new anonymous billboards.

The billboards appear on ad space that has undergone numerous changes in recent weeks. The owner of the ad space, Mahir Kft., – a company owned by formerly Fidesz oligarch Lajos Simicska, who spectacularly fell out with Orbán at the beginning of 2015 – had previously rented the space to Jobbik as part of a countrywide billboard campaign critical of the Prime Minister and a number of oligarchs tied to Fidesz.

But after a law forbidding outdoor political advertising outside of official campaign season was forced through Parliament by the governing Fidesz-KDNP alliance in July, Jobbik’s “You work, they steal” campaign came to an abrupt end when on July 15 the billboards disappeared from the Mahir ad spaces.

Only three days later, new ads took their place, supposedly at the behest of an unnamed private person. Black block letters on a spare white background declared that “The people cannot be banned, but the government can be replaced.” Mahir Kft. said only that the “public service messages” had been placed at the request of a “private person.”

Now, less than three weeks after the appearance of those mysterious ads, the new “Wage Union” billboards have taken their place.

The vigorous placement of anonymous anti-government messages came directly after Fidesz’s “billboard law” was passed by a simple parliamentary majority. The governing party initially failed to garner the two-thirds majority necessary to pass a bill regulating political campaigns, but to bypass the two-thirds obligation, Fidesz resourcefully placed the regulations into a modification of the law protecting settlements, which needed only a relative majority.

The language of the law proscribes only political parties and the government from placing outdoor ads outside of campaign season, leaving such advertising open to private persons. Jobbik, presumably indirectly responsible for the two ad campaigns since the passage of the billboard law, appears to be circumventing the law by engaging private persons to erect the ads on its behalf.

According to an atv.hu report citing government sources, Orbán is “very annoyed” with the ad campaigns circumventing the billboard law, and has ordered a review to close any legal loopholes.