OFF-Biennale: Art Moves Out Of The “State-Funded Comfort Zone” 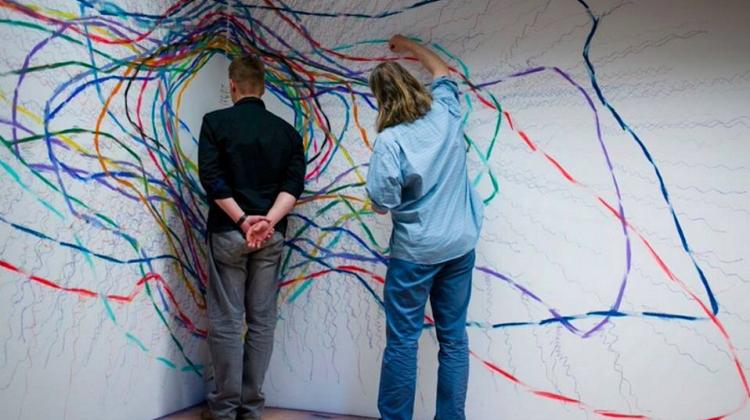 OFF-Biennale Budapest is Hungary’s largest independent contemporary art event, a sort of umbrella project under which other individual events are organised. At the core of the international initiative is the opportunity for artists, curators, art groups and galleries to execute their own projects, such as performances, screenings, exhibitions, street art and others.

This results in the Biennale being a civil initiative, free from any state funding, and from the party politics and compromises that such financing would necessarily bring with it.

The second OFF-Biennale, “Gaudiopolis 2017, The City of Joy”, will take place between September 29 and November 5 at around 50 locations in Budapest, Dunaújváros and other towns. A slogan appears on the Biennale’s latest advertisements: “The castle is theirs. The city is ours.” (Övék a vár. Miénk a város.), a reference to the state-owned Castle Garden Bazaar (Várkert Bazár) where the state-run Hungarian Academy of Art holds exhibitions.

OFF defines itself as independent, meaning they don’t apply for state funding and do not have one dominant sponsor who could influence the event ideologically. The goal instead is a “DIY” Biennale, based on the local art scene.

“It is surely the most important festival organized by civils or volunteers that is exemplary because of the inclusion of not only quality exhibitors, but small galleries and workshops,” assistant professor at the ELTE Institute for Art Theory and Media Studies Katalin Teller said of the OFF-Biennale. “Its reception has been absolutely positive in the independent critic and art scene.”

The history of the OFF-Biennale began with an idea in 2013, when the event’s creator Hajnalka Somogyi was freelancing and curating exhibitions abroad.

“Since 2010 there have been really drastic changes in the art system, and progressive artists and art professionals have been and are of the opinion that these quite harsh changes that the government initiated were not always on a professional agenda, and definitely not in dialogue with the professional scene,” Somogyi said.

“By the end of 2013 there was an overwhelming sense of frustration,” she continued. “This lethargy prompted me to think of how to turn the table. How not to feel victimized. How to initiate certain processes that contribute to the sustainment of progressive art.” She invited more than 20 colleagues and presented her idea, which received positive responses.

They began working first with a seven-member curatorial board under the auspices of an already existing micro-foundation. However, they soon realized that a legal body specifically created for the Biennale’s execution was necessary, and created the OFF-Biennale Association at the end of 2015.

The first OFF-Biennale in 2015 consisted of around 200 events at 100 different locations in Hungary and abroad, and included more than 350 artists from 22 countries. Around 35,000 people visited the program.

OFF is a grassroots association, organised with the help of work groups and personal-professional networks. Around 30 volunteers, mostly university students and young professionals keen to learn, will help to execute Gaudiopolis 2017. The participants are personally invested in the success of OFF-Biennale, since the majority of them have full-time jobs and offer their free time.

Even if volunteers or curators work at state-funded universities or museums, at OFF they participate as individuals, and this grants the Biennale an outsider status, to avoid current cultural policies at state-owned art institutions.

“It is a totally nomadic organisation without any infrastructure,” said Somogyi about the Biennale. “There are a few, very committed members who organize the Biennale, come hell or high water.” Otherwise, she says, the majority of the work group structure had to be reorganized before the second Biennale. OFF is non-revenue, and with only voluntary work the maintenance of a constant infrastructure is impossible between the events.

Katalin Teller said: “It is nearly a miracle that the Biennale will take place this year again since the first time ended [with the participants saying] that this voluntary work cannot keep it up in the long-run… And it can only be wished for that either with the help of private patronage or in a foreign-funded form there will be a next time.”

The main cooperation partner of this year’s OFF-Biennale is GfZK – Museum of Contemporary Art Leipzig. The cooperation project is funded by the German Federal Cultural Foundation. Further supporters include Erste Stiftung, the Goethe and French Institutes in Budapest, and the Warsaw-based Adam Mickiewicz Institute.