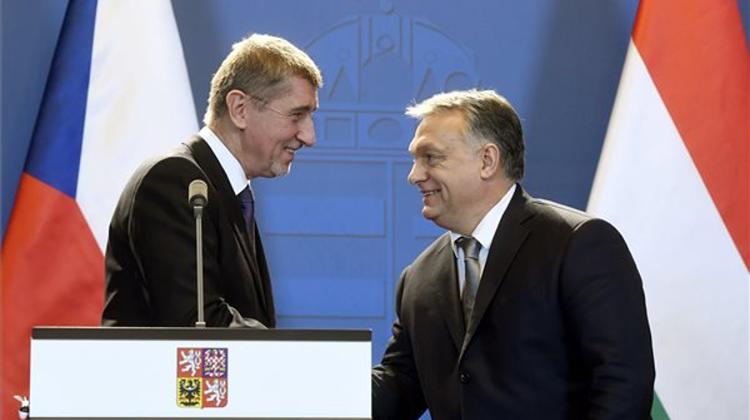 Speaking at a joint press conference with Babis, Orbán said European and specifically central European politics had been in great need of new motivations, new perspectives and needed “to come back a bit to the realm of common sense”.

Orbán thanked his Czech counterpart for Prague having sent border patrol officers to the Hungarian-Serbian border “in the middle of the migration crisis”.

He said Hungary and the Czech Republic shared the same views and interests when it came to the most important questions facing Europe. On another subject, Orbán said that US billionaire George Soros “has become like a true migrant: he has crossed all borders.”

He insisted that Hungary wants to promote its own interests and does not wish to become a destination country for migrants. Soros, on the other hand, “wants to make Europe a continent for migrants”.

Orbán was asked about recent remarks Soros had made in Davos, and he said that “such aggressive attacks are not often launched against Hungary”. Soros seeks to participate in Hungary’s election campaign and “started off with huge lies,” he added.

The prime minister was also asked if Hungary’s quitting talks on preparations for the United Nations’ agreement on migration was a possible option, and Orbán said that “the principles and methods of resolution” to be laid out in the document were unacceptable.

He said that the draft would be scrutinised by the government while the foreign minister has been asked to prepare a detailed report for the next cabinet meeting. Babis praised the cooperation between Hungary and his country and said that the two governments shared positions on a number of European issues. He said that the EU called for reform and added that “the people should be listened to”.

He insisted that the EU’s migrant quotas were divisive and ineffective, and added that this position was shared by all Visegrad members. He also added that Hungary had resolved the migrant issue “within the legal boundaries” though it has “received much criticism” for its handling of the problem.

Concerning bilateral relations he welcomed that trade ties and mutual investment had increased, and also praised cooperation in the defence industry. He added that he saw further opportunities for cooperation in high-speed railway construction.

Babis said the Visegrad countries saw eye to eye concerning topics such as the EU’s cohesion funds, the community’s budget or Brexit.