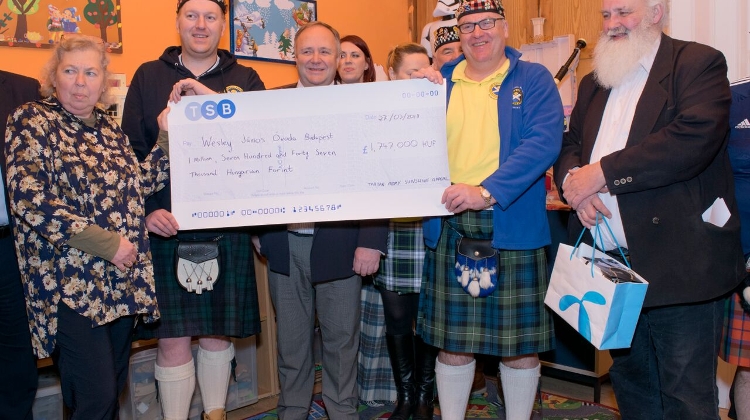 On the day Scotland played Hungary at football in Budapest, the visiting supporters' ‘Tartan Army Sunshine Appeal’ made a donation of HUF 1,700,000 to the local Wesley János Nursery, presented by British Ambassador Iain Lindsay.

“I am delighted that the Tartan Army Sunshine Appeal have raised so much money for renovation work at the Wesley János nursery in the 8th District, continuing a long tradition of Scottish philanthropy in Budapest stretching back to the mid-19th century. Well done, the lads and lassies of the Tartan Army!” The British Ambassador told XpatLoop.

See the video below for more from HMA Lindsay (pictured below, left) about the Tartan Army Sunshine Appeal in Budapest. 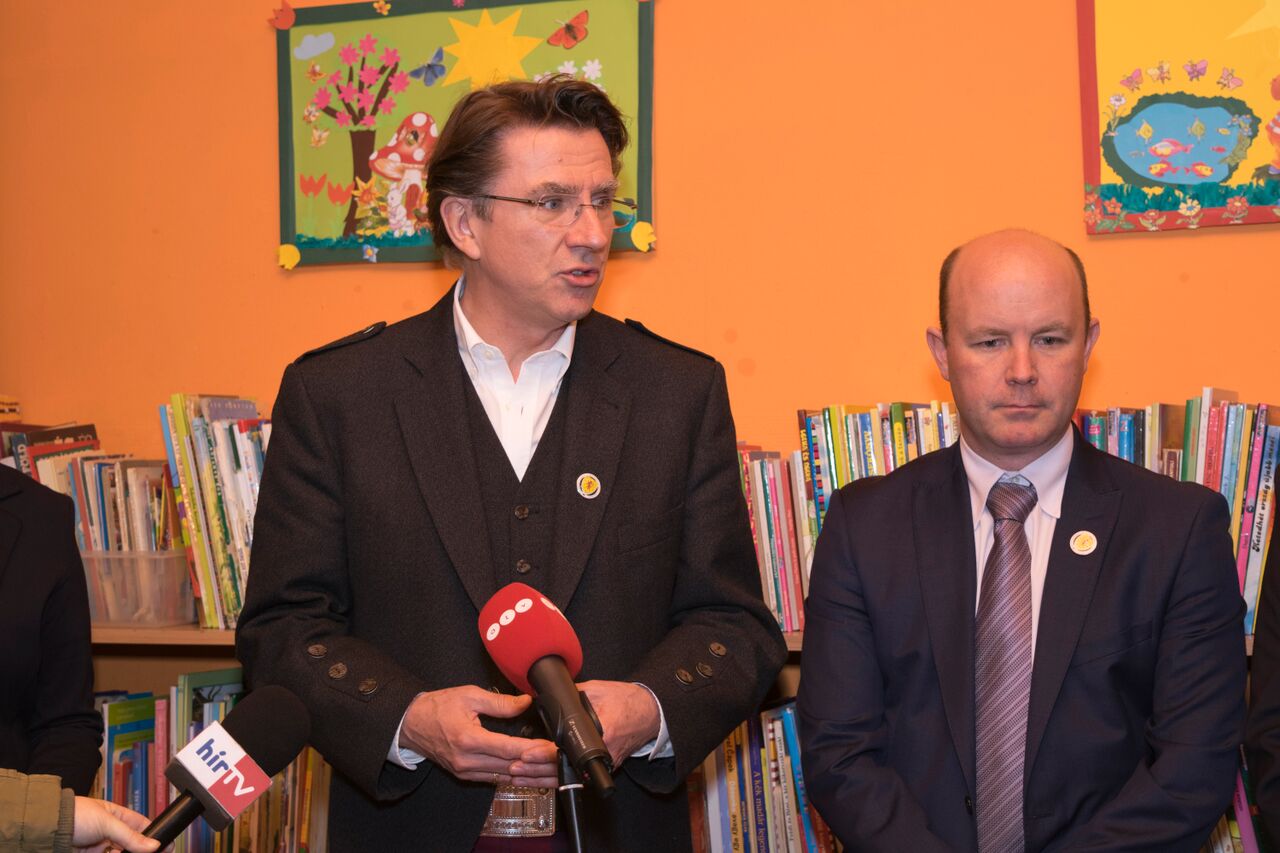 Scotland's national team played this friendly match in Hungary on the evening of 27 March, winning 1-0, and a large number of Scottish football fans celebrated in the Hungarian capital.

Beforehand they had approached the British Ambassador, born in Scotland himself, along with  Duncan Graham the Chair of the St Andrew's Association, and others to ask for their advice, and all agreed to suggest a charity programme supporting nurseries.

"St Andrew's Association is delighted to be involved with the charitable donation, due to the efforts of St Andrew's Association Secretary Patrick McMenamin, made on behalf of Scotland's football fans. Not only do they travel to support the national team, they give a substantial donation to every country they visit. They are a credit to their country and the game of football," Duncan Graham told XpatLoop.

Although the The Nursery Project primarily provides support to nurseries in the countryside, on this occasion the visiting fans requested to find a nursery in Budapest as the football match took place in the capital.

The HUF 1,700,000 will be used by the local St Andrew's Association to upgrade one of the playrooms of the nursery and to provide necessary equipment there. The nursery and the charities organising the fundraising welcome further support for the renovation of the other playroom and the changing room.

This charity project supporting nurseries is managed by volunteers: a group of individual volunteers and expat organisations work with the nurseries. In addition to their financial donation, voluntary days are organised regularly at the venue where expats and locals work together to fix and assemble furniture or equipment.

The supporting organisations include the Irish-Hungarian Business Circle, the St. Andew's Association, the Canadian Chamber of Commerce, Clarke & White, and others, some pictured below. 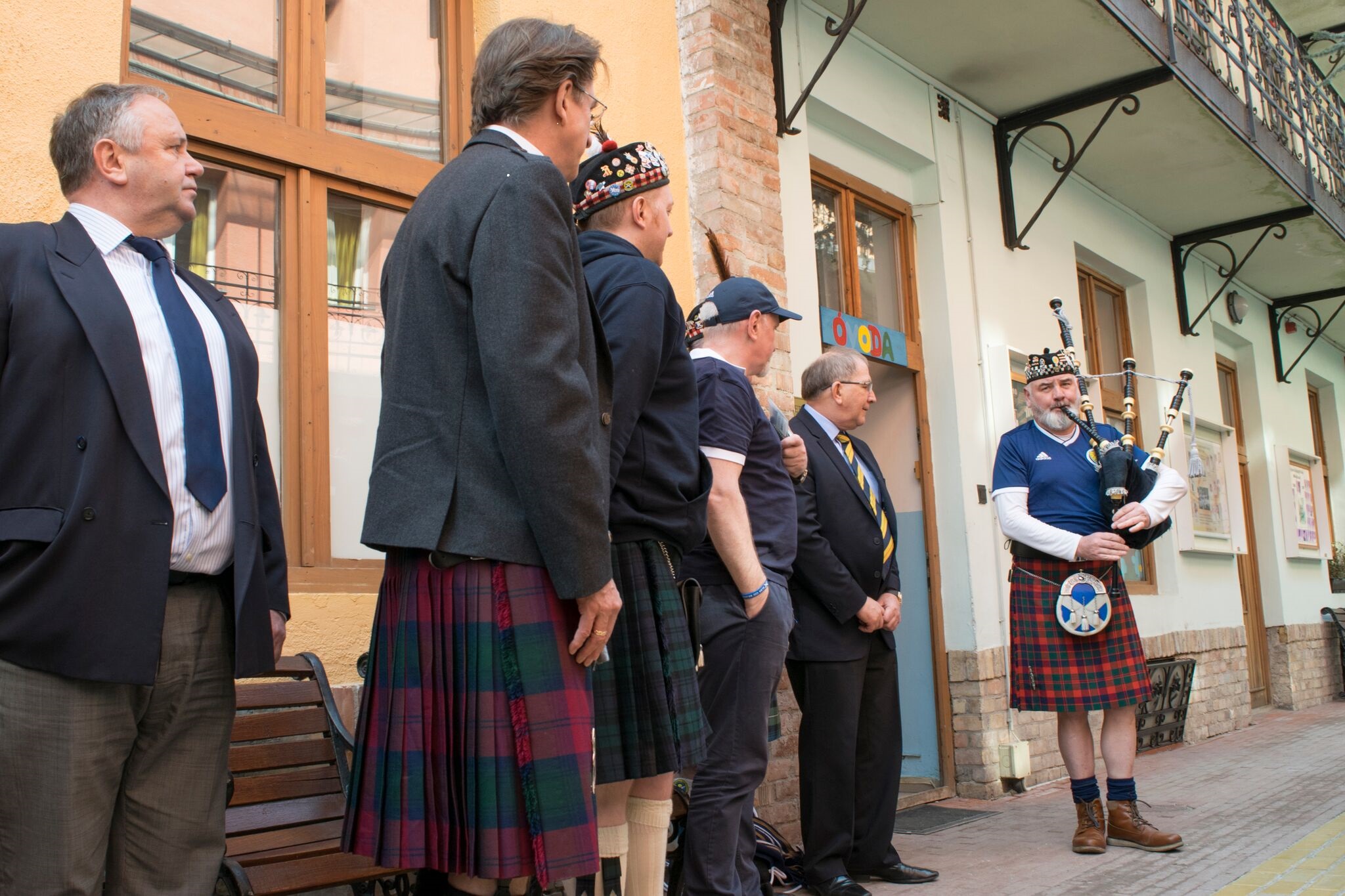 Wesley János Nursery is located in the 8th district of Budapest, it has two playrooms for 44 children. The priority now is to upgrade the room for the older children, which includes a complete repainting of all surfaces, changing the furnishing and lights, installing a TV, and buying a new washing machine and a drier.

We're told a more detailed renovation plan with a shopping list is being drawn up. The plans are to possibly refurbish both play areas and to raise more funds for additional works.

Zsuzsanna Bozo, recently named as the Irish-Hungarian Business Circle 'Person of the Year' due to her related charity work, told XpatLoop, " Oltalom Egyesület - lead by Mr Gábor Iványi - and the Wesley Nursery is an outstanding example of care and support for children in need."

"Expats who want to take part in the actual work of painting, assembling furnitures, and so on, please let us know. We plan to complete the job during the summer, when the nursery is closed for holiday," she said. Click here for more about 'The Nursery Project'.

The Tartan Army Sunshine Appeal charity aims to make a donation to identified children’s charities in every country in which the Scottish National Football Team plays a match. Since 2003 this has been achieved uninterrupted. The donation to the Budapest nursery is the 66th since the beginnings.