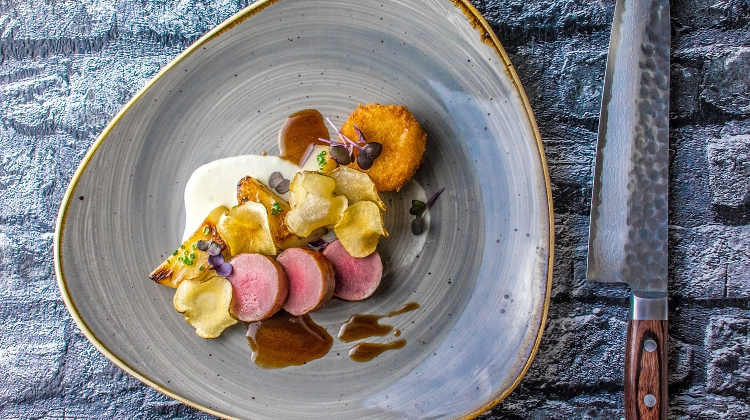 Great wines, fine fish, a variety of mushrooms and game. Nature was generous when it comes to the Balaton region.

This variety makes the local cuisine one of the most interesting in the country. During the summer months many Hungarians get first-hand knowledge of this, but the big problem of the area is that in winter the guests tend to stay away from the lake.

So gastro entrepreneur Dániel Bezerics took the old saying ‘if the mountain won't come to Muhammad, then Muhammad must go to the mountain’ to heart, and by opening Paletta Bisztró brought the kitchen of Balaton to the capital.

Bezerics will probably never lose his longing for his home, thus this son of a winemaker – born in Keszthely, on the western shore of the lake –, always returns to Balaton. After studying economics in Budapest, he set about gradually building his own small gastro-imperium around Hungary's favourite lake.

It started in 2013 in Balatonboglár with the opening of the first Paletta Bisztró. This was followed by other restaurants, including the TéliKert Bisztró, the Fröccsterasz (both 2014) and the second Paletta Bisztróbar (2016) in Keszthely.

His ambition as a gastro entrepreneur is not just a business venture: Bezerics made it his personal mission to make the cuisine of Balaton known throughout the country.

Therefore the jump to the capital was the only logical step. Last November Paletta Budapest opened. Like the other restaurants with the same name, Paletta relies on upscale bistro cooking and a relaxed atmosphere.

The interior is dominated by maritime motifs: the contrast between the whitewashed wood paneling on the walls and the turquoise planks on the floor in combination with summer photographs and other natural deco elements actually give the place a bit of a beach-bar feeling. The furniture is simple and invites you to just take a load off.

Located in Tompa utca 28, Bezerics has chosen a site in one of the up-and-coming districts of Budapest. This part of District IX is getting better and better, in no small part due to the increasing real estate prices in the city centre.

It mainly serves a younger but quite sophisticated audience, and unlike in the restaurant street Ráday utca – also District IX –, there are fewer tourists here.

Although Bezerics says it was more of a coincidence that made him pay attention to the property in the Tompa utca – "I've arrived here like Columbus to America" – he quickly realised that the area is receiving more and more attention from restaurateurs.

Every dish is a little work of art

For patrons Paletta will definitely make the area better by offering fine-dining at very reasonable prices. Despite being “only” a bistro, the restaurant sports a kitchen that can compete with other sophisticated establishments of the city. This is mainly due to its owner, who pushes his small but well-tested team – which he brought from Balaton – to top performances.

For him the development of the menu is also an art form. All of the dishes are carefully thought through, both in terms of taste as well as presentation. In addition, the courses tell a story of tradition and Balaton lifestyle, making the pick of one favourite a nearly impossible task.

If you were to force Bezerics to select his favourite dish, you would almost certainly get the “venison mulled wine”, which is a venison consommé with stuffed cabbage and baby mushrooms. This soup, refined with wintry spices and red wine, is not to be missed.

Moving on to the appetisers you should definitely try the Dödölle, a classic of Hungarian cuisine. This potato dumpling was once frowned upon as poor people's food. However, at the Paletta Bisztró, where it is served with almond cream, homemade ricotta and crispy garlic, the dish gets a contemporary upgrade.

Between tradition and global trends

Although the Paletta derives a lot of its inspiration from its original home, it also finds new ways to surprise. A number of the main courses are influenced by international cuisine and prepared using the most modern kitchen techniques.

In addition to the Asian-inspired chicken paprikash or the cajun blackened sturgeon with curry cream sauce, Bezerics and his team are also borrowing from the BBQ movement: much like its American four-legged version, the meat in the Pulled Ponty (Hungarian for carp) sandwich is prepared for hours at a low temperature. The result is a bone-free, smoked deliciousness from the belly meat of the carp.

A delicacy that is especially convincing in terms of the quality of the meat is the schnitzel fried in panko crumbs. At Paletta, the “Fledermaus” version is made, which is a large, very delicate part of the pig. Making the meal even better are the house pickles and the celeriac mash that come with it.

If you still have room for dessert, you can choose between sweet classics of the Hungarian and international cuisine as well as a selection of cheese specialties from the Balaton region.

Representing the red-white-green flag is Aranygaluska, a type of walnut dumpling cake, which comes with crème anglaise and apple cinnamon ice-cream.

The wine list of Paletta Bisztró is definitely worth a look. Bezerics offers wines from his family's estate here, but bottles of other smaller, yet iconic wineries are also available. You guessed it: they come from the Balaton region.

This is a restaurant that we will certainly visit again, especially since they offer a lunch meal at a fixed price (the à la carte menu is only available from 6pm).

Paletta provides an authentic opportunity to taste one of Hungary's most popular regional cuisines, but what makes it great is that it offers its high quality and service at surprisingly moderate prices.

It also gives you an itch to hop in the car and visit the original establishments in Balatonboglár and Keszthely, but unfortunately the season at the lake doesn’t begin until May. Until then you can get a taste of summer in District IX.