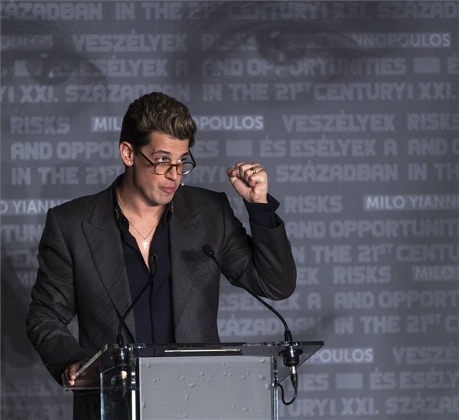 Critics of the government struggle to figure out whether the decision by a public foundation to invite two controversial personalities, Steve Bannon and Milo Yiannopoulos to address several hundred strong audiences in Budapest carries a political message.

In Népszava, Gábor Horváth discribes the presence of President Trump’s former campaign strategist and the man even he had to sack from Breitbart for his controversial remarks on gay sex between adults and minors, as a deliberate provocation.

He believes the government side enjoys the sight of liberals gasping for air and pursues a strategy of successive conflicts. It is in this context that he makes sense of the ‘Stop Soros bill’, due to be tabled in Parliament next week.

The legislation is expected to draw the ire of the government’s opponents at home and abroad. The government doesn’t mind, Horváth continues; it is intentionally provoking clashes in order to trigger reactions which then are to interpreted as threats to Hungary against which the government alone can defend the nation.

On hvg online, Gáspár Miklós Tamás characterises what happened as a ‘despicable and disgusting gesture’ which makes sense if one considers it as a ’reverse advertisement’. He sees both Yiannopoulos and Bannon as representing a trend among the alt-right whereby they pose as rebels against ruling powers.

This has been unprecedentedly successful, he continues, in so far as it got a man whom he describes as a ‘half-wit’ elected President of the United States. According to the Marxist philosopher the invitation proves that the Hungarian government is following a similar strategy.

This government does not represent the establishment, the author continues, but only because there is no establishment. An establishment must have authority among the wide population, he explains. The last real establishment, he contends, was that of the Kádár regime.

On Válasz, András Stumpf believes Yiannopoulus was invited to speak in Budapest simply because the organisers knew that he would praise Prime Minister Orbán. In a n interview with Mandiner, Milo Yiannopoulos said the Hungarian Prime Minister was someone very much like Mr.Trump and ascribed Hungary’s rejection of undocumented mass immigration to what he called ‘the Hungarian national character’.

The government side might hope that this international star will help ‘put Hungary onto the world map’ Stumpf remarks, adding however that Milo’ doesn’t even suspect that ‘his kingdom has already come’ in Hungary.

What Stumpf means is a land of hypocrites, for Yiannopoulos is a fervent Catholic, yet his lifestyle and opinions contradict several main tenets of the Catholic church. Hungary, the independent conservative commentator continues, swarms with such pundits.

Hvg’s Árpád W. Tóta writes in an angry commentary that it is useless to bear children in Hungary and condemns the government’s campaign against demographic decline, while he himself is a father.

By way of contrast, an author at Pesti Srácok, who writes under the pen name Paranoid Android asks whether Tóta is a human being before concluding that he is not.

Meanwhile the author, whose identity is apparently known to Stumpf and who speaks on behalf of Christian values, is one of those ‘fervent Christians’ who live with their partners outside marriage and have no children although they are well over 30.

People’s private lives are their own business, Stumpf writes, but when one is a public personality private life may become a matter of credibility.

This opinion does not necessarily represent the views of XpatLoop.com or the publisher.
Your opinions are welcome too - for editorial review before possible publication online
Click here to Share Your Story