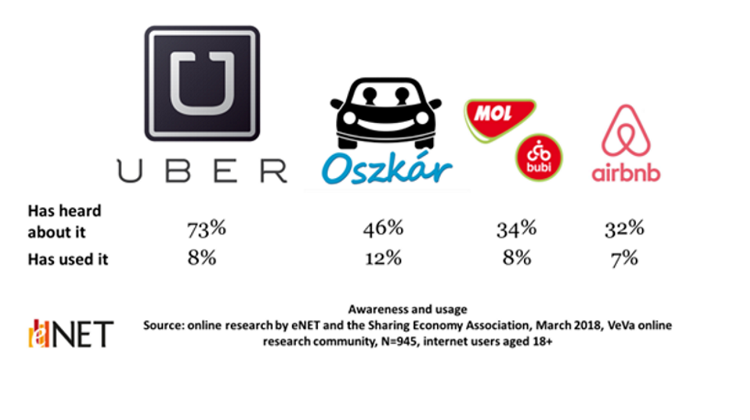 The sharing economy model is gaining ground internationally and in Hungary. One third of Hungarian Internet users have heard about the notion of social or sharing economy, and both the user base and turnover of the companies involved grew significantly in 2017 concludes the comprehensive research conducted in Hungary in this topic so far.

According to eNET’s first sharing economy research of 2014, the sector had been in its early phase then. By the end of 2016, public awareness of certain forms of the sharing economy had grown drastically.

That was the time when Airbnb became popular, and also when Uber, which remains the most widely known sharing economy company, left Hungary with much fanfare. But market players have not been very successful in turning this awareness into actual business so far.

One third of adult Hungarian Internet users have heard about the notion of social or sharing economy; this ratio has not changed since 2016.

Car sharing is the best-known usage of this model: 84% of Internet users have heard about such services organised through a website or an application, while 81% are aware of “community taxi” services.

Home sharing is also widely known, with a 59% ratio. The awareness of all three forms of business grew considerably between 2014 and 2016, and has been stagnating since then.

It’s not only the individual areas within the sector that are well known but also some market players. Even though Uber has left Hungary, the company remains the most widely recognised player in the sharing economy, which at least seven out of 10 people have heard of.

The awareness ratios of these market players rocketed between 2014 and 2016, and has been stagnating or slowly rising since that time.

While much fewer people use than know about the sharing economy, the sector is characterised by slow but steady growth. With usage ratios between 8 and 12%, the above-mentioned companies are the largest players in Hungary’s sharing economy.

Community financing and office sharing are less widely known solutions in the same sector: about 20% of Internet users have heard about them.

Still, in view of the special nature of this business model, these ratios are quite high.

Six out of 10 Internet users think that this is a good way to gain additional income, and also six out of them are of the opinion that the sharing economy is for people seeking flexible work.

Half of Internet users say that the sector gives people access to the labour market who would otherwise find it hard to find work.

On the other hand, half of the respondents are also aware of the disadvantages, i.e. that the sharing economy erodes the safety of employment as it offers no paid holidays, or pension or social security contributions paid by the employer.

Besides Internet users, we also asked players in Hungary’s sharing economy about their views of the sector.

Almost two thirds of these companies have been established in the past two years, and all but one have remained micro-sized businesses. Their user base and turnover usually grew in 2017.

Very few currently offer cross-border services, but two thirds are planning to enter international markets in the near future. More than half of these businesses have involved venture capital or a business angel, and one third of these investment partnerships started in 2017.

The invested amounts vary widely, from HUF 1 million to 300 million, with HUF 10-20 million being the average value. Hiventures Zrt seems to be the most active investor.

According to the managers of the platforms and companies involved, most users hold clearly positive views of the sharing economy in general, the sector’s judgement by investors and corporate partners is quite positive, while public sector entities have rather negative opinions.

Two thirds of the managers see regulations – or rather the lack of them – as the main challenge and limitation of the sector. They expect regulators and governments to establish a comprehensive and enforceable regulatory environment addressing taxation and licensing issues, as well as support for the growth of the sharing economy.

The companies participating in the survey are optimistic about the future of the sharing economy; they argue that this business model brings economic benefits and helps build local communities.

The research conducted in March 2018 consisted of two parts. Firstly, a survey of companies, involving the majority of sharing economy businesses established in Hungary (19 firms) and secondly a survey of private persons, i.e. 945 Internet users aged 18+, through eNET’s own online research platform (veva.hu).

The results are representative of the views of Hungarian Internet users over 18 years of age in terms of sex, age and region.