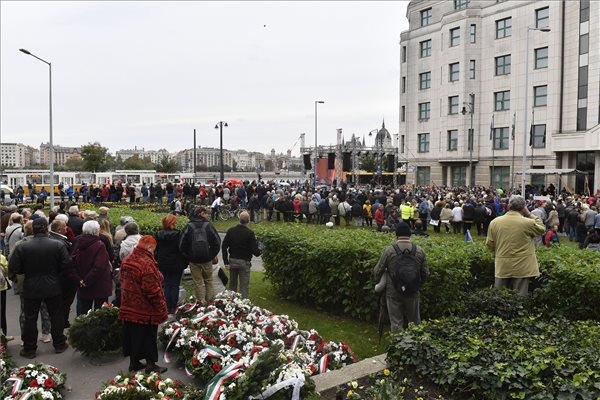 Commentators are just as divided on the speeches by leading politicians as the latter were in their interpretations of 1956 and current political matters.

In Népszava, Miklós Hargitai criticises Prime Minister Viktor Orbán, for saying that Hungary will not yield to pressure from Brussels and for claiming that this approach is consistent with the feelings of Hungarians who revolted against Soviet oppression 62 years ago.

He accuses the Prime Minister of merely wanting to protect what the left-liberal commentator sees as a kleptocratic regime from criticism by the European Union.

Meanwhile, he finds the performance of the speakers at the opposition rally on the anniversary pathetic, because the only message they were able to offer was an appeal to the European Union to punish the Hungarian Prime Minister.

Hargitay concedes that both sides may be right on some points, but if that is all they can say about 1956, ‘that is not at all promising for the future’.

On Mandiner, György Szalma deems it telling that the most popular speakers at the opposition rally on Tuesday were two personalities who don’t belong to any party.

Ákos Hadházy, the former co-chairman of the LMP used the anniversary to promote his campaign urging the government to join the project to establish the European Prosecutor’s Office, while Péter Márky-Zay, who was elected Mayor of Hódmezővásárhely as an independent candidate supported by the opposition parties proposed similar unity behind independents for nationwide elections in the future.

Szalma describes both speakers as clumsy and boring and thinks that the government side has nothing to fear from an opposition that cannot produce better candidates to lead the country.