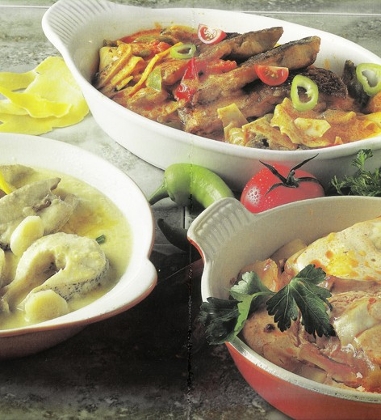 Fish soup and Hungarian fish soup – no two the same. Even though Hungary is not a “nation of fishermen” the native fish soup, which is made only from freshwater varieties, is one of the country’s most popular dishes, and is even considered to be a national specialty.

There are numerous regional versions of this bright-red delicacy. Some are made with lots of different varieties of fish, others with only one.
In some areas, the cook starts with an oil and onion base, similar to that for pörkölt, which is then pushed through a strainer, topped up with water, and large pieces of fish added. For thicker soups, a basic broth is made from less epicurean small fish.

In the area around Baja, broad strips of pasta are added. If the soup is simply cooked “the fishermans way,” the ingredients are just placed in a large pot, or kettle, so minimum effort is required.

But however it is cooked, bright red ground paprika is ubiquitous in Hungarian fish soup. It was not until the end of the 18th century that paprika was widely grown in Hungary, and it follows that this must have been when it became

Fish soup cooked the fisherman’s way common practice to add it to fish soup. Sweet or semisweet paprika can safely be used for most Hungarian specialties without suffering any loss of flavor. However, this is not the case with fish soup. Although it need not be hot enough to bring tears to the eyes, at least medium hot paprika should be used to give it the right flavor.

Fresh green or dried red paprika pods can be served separately for the benefit of those who prefer spicier food, adding this to suit their own tastes. And, of course, fresh white bread is also required, as this will “put out the fire.” Fish soup is traditionally followed by a farinaceous dish: quark pasta.

Not only does each area have its own particular recipe, it also has its own master chef, whose reputation will have transcended the region’s borders. All year round, numerous well-attended cooking competitions are held all over Hungary, at which both professional and amateur cooks have the opportunity to show just what they can do. Their entries are judged by a very strict jury, and subsequently tried by all of the participants and visitors.

Zander, pike, eel, tench, trout, roach, river perch, carp.
The fish are gutted and cleaned, then cut into pieces, and placed in the kettle.
The onions are sliced and added to the fish.
Chopped tomatoes
Water is poured over the contents of the kettle, which are then briefly brought to the boil.
A tablespoon of ground paprika is added. Rather than stirring the contents, the kettle is gently tilted from side to side.
The soup is left to bubble away for about 1 hour.
The bright red soup tastes best when still very hot.

Coat the pieces of fish in flour. Saute in hot oil until crispy on both sides, then remove. Fry the onions in the cooking juices, then remove from the heat and sprinkle over the ground paprika.

Pour over a little water and add the vegetables. Simmer until cooked, then add the sour cream and bring to the boil again. Place the pieces of fish in the sauce and simmer for about 15 minutes, gently tilting the pot from side to side occasionally. Meanwhile, cook the pasta.

Carefully remove the fish from the sauce. Add the hot pasta to the vegetables. Place in a heatproof dish, and arrange the pieces of fish on top. Heat through in a preheated oven (300 °F/150 °C). Garnish with sliced tomatoes and bell peppers.