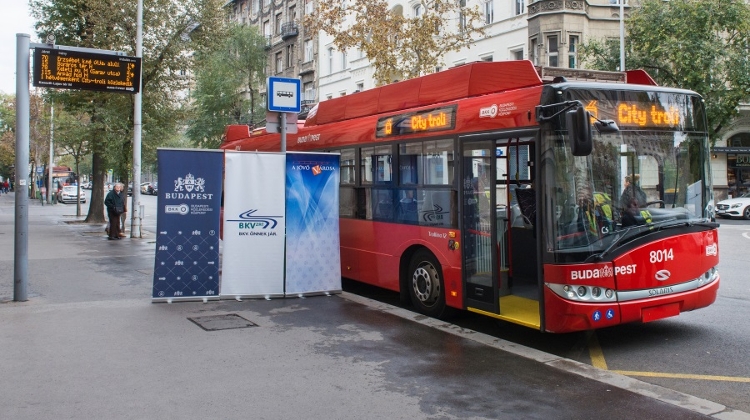 A new weekend City-trolleybus service started its operation between Fővám tér and Lehel tér in the fifth district of Pest. The low-floor, single trolleybuses run on Saturdays and Sundays only.

The new passenger- and environment-friendly City-trolleybus service operates every 30 minutes on the route of regular bus 15 between Fővám tér and Lehel tér from 8:30 to 19:00 on Saturdays and from 9:30 to 19:00 on Sundays.

Three of the major market halls of the capital are conveniently situated along the route: the Great Market Hall at Fővám tér as well as the markets at Hold utca and Lehel tér, all frequented by locals and tourists alike. Regular fares apply.

BKK and BKV plan to extend the number of routes served by electric propulsion in Budapest taking advantage of the possibilities offered by modern technologies with the aim of reducing pollution caused by diesel fuelled vehicles.

The new City-trolleybus is a pilot project to utilise the off-wire mode of the trolleybuses. The Skoda-Solaris trolleybuses are capable of running more than four kilometres without overhead wires, using their batteries instead, just like an electric bus.

The quiet vehicles with a passenger capacity of 67 are all low-floor thus providing step-free access to passengers with reduced mobility or to those travelling with a baby carriage or luggage.

BKK will monitor the new service and gather experience in order to implement further developments in light of the results.