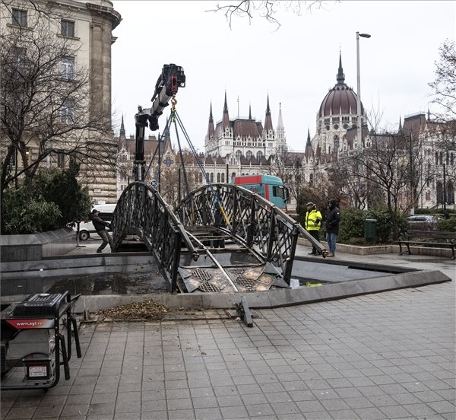 The leftist Democratic Coalition (DK) and the Nagy Imre Society held a demonstration against the removal of the martyred 1956 prime minister’s memorial from Martyrs’ Square near Parliament.

The memorial, a bronze statue of Imre Nagy on a bridge, was removed in the early hours of Friday, with Tamás Wachsler, the chief coordinator of reconstruction of the area, citing the square’s rehabilitation as a reason.

The memorial will be moved to Jászai Mari Square near Margaret Bridge, he said. A reconstructed post-WWI monument dedicated to the martyrs of the communist Red Terror in 1919 will take its place, he said.

Demonstrators lit candles at the former site of the statue on Friday afternoon. Former MP Imre Mécs, who was also sentenced to death after the 1956 uprising and served years in prison, called for the memorial to be restored to its previous place.

DK’s MEP Csaba Molnár said that the statue was a memento of the power of the people and the nation that will not tolerate tyranny.

Gergely Őrsi, a Budapest councillor of the opposition Socialists, called the memorial’s removal a “shameless act on the government’s part which again brought people on the streets”, and called for the memorial’s restoration to Martyrs’ Square.