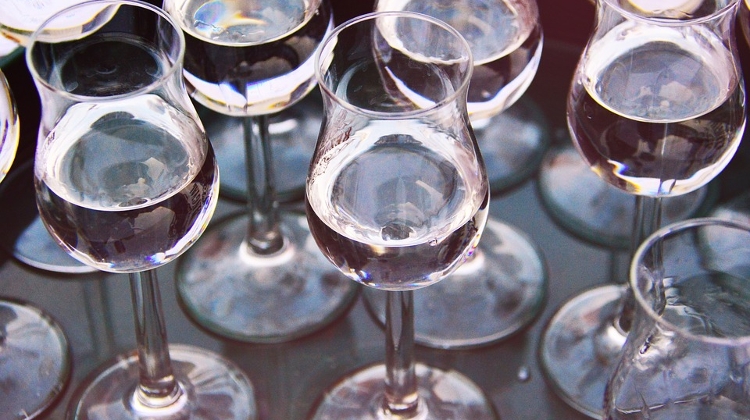 The word pálinka derives from the Slavonic stem paliti, "to burn, to distill". In Hungary a place called Kecskemét is most famous for its barack pálinka (apricot palinka), and its high quality due mainly to the apricots used, such as magyar kajszi and magyar legjobb, which thrive in the region.

Also, the apricot kernels are ground and added to the liquid during the distillation process, and this is what gives the drink its special flavour.

For the first part of the barack palinka process, the apricot fruit is stored in large barrels.

During this time, the fructose converts naturally into alcohol. The mash is washed and immediately distilled. That is to say, it is heated, and the rising vapors are collected. As they cool, they turn back into liquid.

The resulting schnapps, or brandy, is transferred into oaken barrels and left there to mature for at least one year, during which time it loses its “bite” and develops the characteristic, brown-yellow color — it is “fit aroma, and quality from one year to the next. The alcohol content is also predetermined.

For fütyülős barack and pecsétes barack it is an impressive 43% proof. The first barackpálinka left the Kecskemét Municipal Distillery in 1884, and for bottling. The modern, computer-controlled distillery at Kecskemet still follows traditional methods.

However, there is no substitute for the knowledge and expertise of the distiller, who regularly takes samples to check the quality of the spirit and decide on the choice and duration of the subsequent processes.

As you would expect, the quality of the fruit varies between harvests, but – unlike with wine production – no differentiation is made between vintages. Instead, attempts are made to maintain the same flavor, aroma, and quality from one year to the next. The alcohol content is also predetermined.

The first barackpálinka in Kecskemét owes its reputation to the Duke of Windsor (1894-1972), who became Edward VIII in 1936 only to abdicate a few months later before his coronation. He was a frequent visitor to Hungary throughout the 1930s, and, as befitted his well-founded reputation as a bon viveur, became closely acquainted with the nightlife of Budapest.

On his first visit to a particular restaurant, he asked his companions to order him a national drink so as not to draw attention to himself. Thus he was introduced to apricot schnapps, which he soon grew to love and made famous abroad.

Measure the ingredients into a cocktail shaker, and mix with the spoon. Spray lemon oil over the top. Mecsek is a spicy, typically Hungarian herb liqueur with a slightly bitter flavor. It gets its unmistakable aroma and name from the herbs of the Mecsek mountains in Transdanubia.

Cherry schnapps from Kecskemét (43% proof), which is made from the Germersdorfer Riese cherry, is another extremely popular variety. It is distilled with the cherry pits, and they are what give it its unique aroma.

Cseresznyepálinka becomes crystal clear if it is left to mature in ash barrels. A few decades ago, it was the done thing to drink kirsch in Hungary, and over the years it became more popular than the apricot and plum brandies.