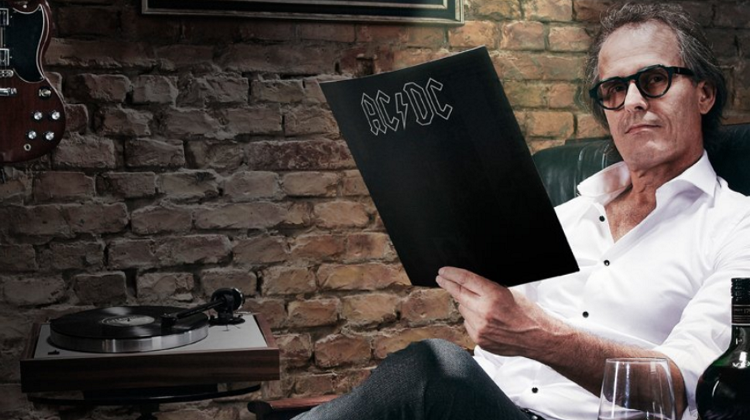 The Vinylize showroom just catches you eye while exploring the district across Rákóczi utca from the Buddha Bar. It’s an intriguing neighborhood, neither touristy, hipster nor residential.

If you are a lifelong wearer of spectacles, you're most likely always looking for  alternatives to eye wateringly expensive luxury brand eyewear or bland, shopping mall goggles. And those recycled wooden clunkers just don’t cut it.

The specs and sunglasses on display in the window of Vinylize were something else altogether.

The ebullient young man presiding over Vinylize introduced himself as Zack Tipton, the brand’s founder. This is the story he went on to tell.

Zack was born in Sun Valley, Idaho. Of Hungarian and Scottish ancestry, he grew up in Socialist Hungary, southern France and the Pacific Northwest of America. In 1998, when Zack was a student in Seattle, his vision began to deteriorate. He decided to make his own glasses.

Searching for the perfect material to make frames, Zack discovered a pile of his father’s old vinyl in the corner of the garage workshop where he was hard at work. He realized he could get three pairs of eyewear frames out of a single album. Inspiration struck him like a bolt of lightning. The year was 1999. Vinylize was born.

In 2000, while on holiday in Hungary, Zack presented his ideas to an eyewear factory named EMI. Formerly known as Granvisus, the factory had, at its peak, pumped out 400,000 frames a year, supplying many Eastern Bloc countries with fashionable eyewear.

Since 1989, and the fall of socialism, the company – renamed EMI – had been unable to counter competition from the cheap Chinese frames that flooded the market and was on the ropes.

Zack moved to Hungary in 2001 and began an apprenticeship in eyewear at EMI. Working with the company’s few remaining employees, he soldiered on until a frame made from vinyl albums that met EU quality standards was produced in 2004.

Along with his brother Zoltan, Zack set up Tipton Eyeworks. Travelling Europe on counterfeit Eurorail tickets, he made sure the eyewear was a hit in every major city en route. Today, Tipton Eyeworks glasses and sunglasses are sold all over the world, in the hippest stores. These include Paris, London, Berlin, New York and LA.

From 2007, all Tipton Eyeworks glasses have been handmade in Budapest by skilled craftsmen.

Zack’s ingenuity and the Tipton Eyeworks’ never surrender attitude to succeeding and surviving in an extremely competitive industry is, of course, heartwarming. The fact that this is happening in Hungary adds a whole other dimension of awesomeness.

The vinyl used in Vinylize’s frames comes from distributors and pressing plants across Europe. “A couple of years ago,” Zack said, “we got a bunch of blue vinyl without labels. It turned out to be Pink Floyd albums. We made a special Pink Floyd collection and it sold like hotcakes. A half year later we received an unpleasant letter from their lawyers. We settled up with the Floyd and then signed an exclusive deal with AC/DC.”

The glasses in the AC/DC Collection are made from the classic 1980 album Back In Black, featuring such gems as “You Shook Me All Night Long” and “Let Me Put My Love Into You”.

They’re not cheap, but they are handmade, limited edition, and ooze understated rock and roll cool. Imagine sitting in a boring meeting and knowing you’ve got AC/DC all over your face. It would make you smile every time.

Fittingly, given that Axl Rose has recently been guesting as AC/DC vocalist, Guns and Roses are the next band on Zack’s hitlist. He’s currently in negotiations with them.

If you love the idea of sporting spectacles or sunglasses made from vintage vinyl but don’t fancy AC/DC, rest assured that Vinylize can make a pair from just about any 12 inch record.

All you need to do is supply Vinylize with two copies of the disc. While this has to be the perfect present for the music obsessive in your life, you probably need to check the value of the album before you destroy it forever.

Apparently, U2 albums are too thin. Given the band’s reputation for heavyweight sincerity and what passes for gravitas in rock and roll, there’s something richly ironic in this.

Vinylize glasses are certainly stylish and the rock and roll connection is seriously smart. But Zack’s entrepreneurial spirit is also something to admire. Apart from facing down the legal big guns of musical heavyweights, he’s had to build a business in a country with traditionally high taxation, albeit the corporate tax rate is now the lowest in the EU at 9%. Finding the right kind of salespeople has also been a challenge.

But there are plenty of positive aspects to being based in Hungary for Zack, Vinylize and Tipton Eyeworks. “We’re getting more and more support from people who appreciate a locally made product,” he said, “especially one that’s achieved foreign success. Most of our customers are discerning Hungarians.”

If you have a discerning Hungarian in your life, or, indeed, a rock and roll obsessive who doesn’t want to grow up entirely and who’s hard to buy for, head down to the Vinylize showroom at Irányi utca or go to Vinylize.com. They also do gift certificates.