Hungary's Inflation Slows To 3.1% In November 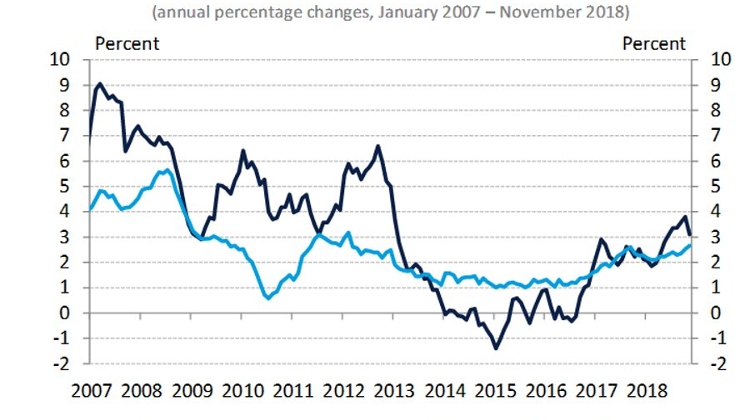 Consumer prices in Hungary rose by an annual 3.1% in November, slowing markedly after accelerating for much of the year, data released by the Central Statistical Office (KSH) show.

Food prices rose by 4.5% and the price of spirits and tobacco climbed by 4.6%, while clothing prices edged up 0.9% and consumer durable prices were up by a moderate 0.6%.

Household energy prices increased by 1.2%, prices in the category of goods that includes vehicle fuel rose by 4.1%, as vehicle fuel was 7.2% dearer, and service prices were up by 2.2%.

Harmonised for better comparison with other European Union member states, CPI was 3.2%.

Core inflation, which excludes volatile fuel and food prices, reached 2.6%. CPI calculated with a basket of goods and services used by pensioners was 2.9%.

In a month-onmonth comparison, consumer prices fell by 0.3% in November.

n a monthly analysis released after the publication of the KSH data, the National Bank of Hungary (NBH) attributed the slowdown in inflation to a decline in fuel prices.

The indicator for core inflation excluding the effects of indirect taxes stood at 2.7% in November, rising from 2.5% in the previous month.

The indicator for demand-sensitive inflation, which excludes processed foods from core inflation rose to 2.7% from 2.6%.

Inflation Slows In November, But Underlying Trends Remain In Hungary