Protesters Cause Damage Worth 'Millions' To Hungarian Parliament 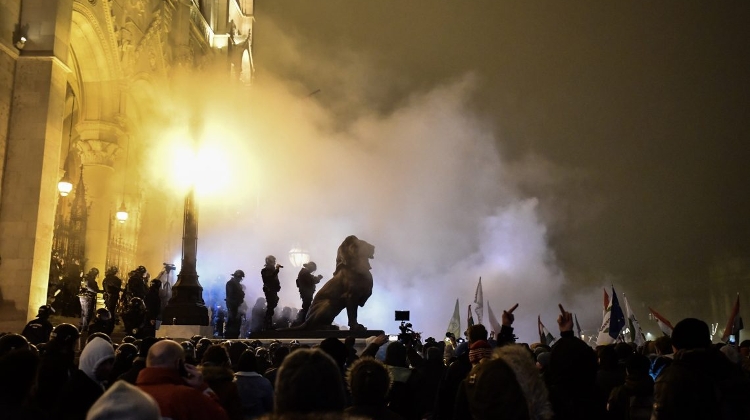 Zoltán Szilágyi said they had no exact figure because the damage was still being assessed, but said that two stained glass and several plain windows had been smashed, the stairs to the main entrance had been sprayed with paint, while the bronze lion figures and candelabra on either side of the entrance were tainted with paint and eggs.

“Parliament’s wall also has innumerable spots of paint or eggs, as well as burn marks,” he said, adding that “the mast of the flag of the nation was also spray-painted”.

Szilágyi said that the protesters had dismantled the fence around the nation’s Christmas tree in Kossuth Square, constructed of sledges meant to be given to needy children; 22 sledges were missing and the tree’s lights were damaged.

Government spokesman István Hollik told another press conference that agents of the “Soros network” have applied their “routine approach of intimidating anyone that has a different opinion”.

During the demonstrations there were “violent provocators and aggressive protesters” that “collected stones in their backpacks to throw them at police and Parliament”; they pepper sprayed officers and threw smoke bombs,” Hollik insisted.

The government considers all forms of street violence unacceptable and impermissible, the spokesman said.