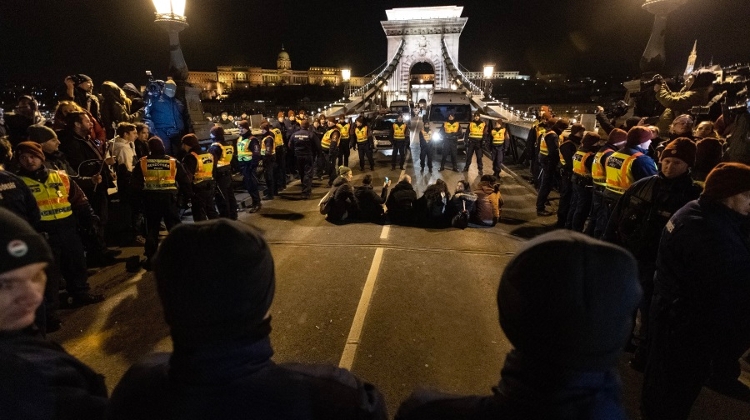 Speakers at a Saturday demonstration held in Budapest against the labour code amendments emphasised the importance of unity, and they also spoke up for the rights of citizens.

Nikoletta Kiss of the Young People for Democracy civil organisation told the crowd gathered in front of the Várkert Bazaar that young workers “don’t want to live in a country where people are at the mercy of their employer and where wages fail to provide a livelihood”.

Civil activist Tímea Molnár said citizens should take advantage of their rights and fight those who abuse their power. She urged them to take responsibility for shaping their future and to take part in this year’s EP elections.

The government spokesman told a press conference that Saturday’s demonstrations were proof that the European parliamentary election campaign had already begun, with George Soros also mobilising his supporters.

István Hollik said it was “perfectly clear” that the labour code amendments were “no more than a pretext” for the protests.

The government does not want to deal with “Soros’s campaign” but it regrets that some trade unions are participating in the campaign of “pro-migration” forces, he said.

Protesters held aloft the flags of Hungary, the European Union and the red and white Arpad Stripes, as well as the banners of opposition parties Jobbik, the Socialists, LMP and Momentum during a demonstration in Budapest.

Protesters had converged on Clark Adam Square from several directions. The “Let the country come to a halt – Budapest – blockade” event is being held as part of a series of nationwide demonstrations.

One group of 50-60 protesters marched from Heroes’ Square, with their numbers reaching a few hundred half way along Andrassy Boulevard. People blowing whistles and honking horns carried national and EU flags and a placard with the slogan “We are fed up”.

Another group marched across Liberty Bridge and then along the embankment on the Buda side towards Clark Adam Square.

Demonstrations were also held in several other cities on Saturday.

In Salgótarján, in northern Hungary, a slow-car protest across the city and a demonstration in the main square were held on Saturday morning.

About 200 protesters demanded a more flexible retirement system and changes to the strike law. Several trade union leaders and party representatives spoke at the event, demanding fair wages, the restoration of non-remunerative allowances, and wage rises in the public sector.

A protest against the labour code amendment was also held in the southern city of Pécs on Saturday evening. At the demonstration organised by local trade unions, protesters shouted “Enough!” and “We will not be slaves!” Flags of the various opposition parties could also be seen in the crowd.

Norbert Benke of the Vasas Trade Union Confederation told the crowd in the city’s central Széchenyi Square that the new overtime rules would break families apart.

Employees want to work five days a week and eight hours a day, he said, and if they undertake overtime, they want to receive their overtime pay promptly and not within three years, he added.

Erzsébet Nagy of the Democratic Trade Union of Teachers in Pécs said the government was unwilling to enter into talks with the trade unions unless forced to do so because the unions had convened a strike committee.

Mrs Nagy called for the restoration of the organisational and economic autonomy of schools and the freedom of education.

Meanwhile, in Tatabánya, north-west of Budapest, the head of the Hungarian Civil Service, Public Service and Civil Service Workers’ Union, Mrs Péter Boros, announced a strike, though she added that the union was prepared to negotiate with the government first.

An anti-government demonstration was held in the square in front of the town hall, where women politicians from opposition parties spoke to the crowd.

Mrs Boros added that they were proposing the formation of a national labour roundtable and “meaningful talks” based on equal partnership with the government.

One key demand is that all public service employees should earn at least the minimum wage, she said, noting that the salaries of local government officials had not been raised for 11 years.

After the demonstration in the capital, a group of protesters marched to the Pest end of the Chain Bridge, blocking traffic on the bridge.

Police pushed most of the crowd onto the pavement, but 15-20 people sat down on the road and refused to move when instructed to do so by police. Police then lifted them from the ground one by one and moved them from the bridge, restoring normal traffic.