Local Opinion: Are The Protests Fading Out In Hungary? 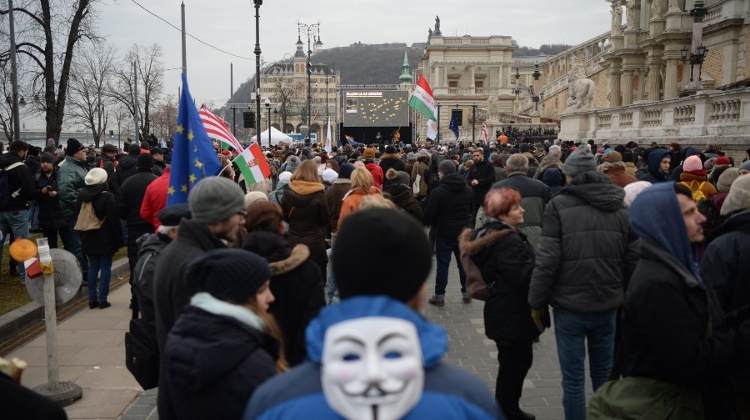 Pro-government outlets think the protest sparked by the law allowing 400 hours of overtime work per year is running out of steam. Left-liberal authors point out that rallies were held throughout Hungary on Saturday.

For the first time over 50 anti-government demonstrations were held nationwide on Saturday, while the main event in Budapest was only attended by a few thousand people, well down on the number on the streets on Saturdays over the past five weeks. The most cheered speaker was an 18-year-old student who has been sharply criticised by the pro-government media.

In its report on the Budapest rally, the liberal site quotes only one speech, the one by Blanka Nagy, the high school student who has become a household name in the past week, in a controversy over the swearwords she used about the government. She responded to the criticism sayng that her pro-government critics had dishonoured themselves.

On Mérce, András Jámbor welcomes the many demonstrations held outside Budapest but describes the one in the capital as a disorganised blunder.

The alt-left commentator complains that there is nobody on the scene who could lead the protest and offer dissatisfied people a programme that would give a sense of purpose to their demonstrations.

On Azonnali, Gábor Kardos writes that the French media was the one place where Saturday’s demonstrations were a major success.

French reporters covered demonstrations throughout Hungary, right after the news about the yellow vest protests at home. Kardos describes the number of the demonstrations outside Budapest and the attendance there as a development of greater significance than the rally in Budapest.

Origo’s Hunor Both characterises Saturday’s rally in Budapest as a pathetic failure, suggesting it was attended by a record low number of demonstrators.

Even the left-liberal press, which tried to heat up the atmosphere during the past few days, the pro-government journalist writes, has had to admit that ‘the revolution has failed’.

As Ripost sees it, the Budapest rally was a pitiful failure. The opposition, the pro-government site writes, has made itself look utterly ridiculous. The participants of one of the three marches that converged on the sight of the rally, they remark, ‘could have fitted onto a number 7 bus.’

In Élet és Irodalom, Mária Vásárhelyi asks leftist Trade Union leaders why they keep talking about the prospect of a general strike when they must be perfectly aware that there will not be one.

First of all, she writes, the restrictions introduced by the incumbent parliamentary majority on strikes during its first term make it risky for the organisers to call strikes.

In case of illegal strikes, they can in fact be sued for the loss they cause to the employers, and the definition of what is unlawful is fuzzy, she thinks. At any rate, the liberal pundit continues, the Trade Unions are extremely weak, and the membership is dwindling, thus it is hard to imagine how they could mobilise the bulk of the working people.

Thirdly she mentions that the membership fees only cover a fraction of the expenses of the unions with the largest confederation getting an annual 140-million-forint support from the state. She suspects this is one reason why the unions don’t ‘actually stand up to the government’.

In Demokrata (print), Gábor Bencsik criticises the opposition for calling the law on overtime hours a ‘slavery act’, when it doesn’t oblige anybody to work 400 hours overtime a year. It just makes it possible, depending on the employees’ consent.

He thinks that vocabulary is part of a war of words fought by the opposition for years. Thus, he continues, they call all migrants refugees, and dismissed the ban on living in public spaces as ‘a ban on homelessness’.

Earlier, when Fidesz broadened the use of public works for the unemployed, the opposition called that law a ‘forced labour act’.

In reality, he writes, the measure was highly successful, to the extent that Fidesz became much more popular in the poorest areas of the country, with the highest ratio of people performing public works.