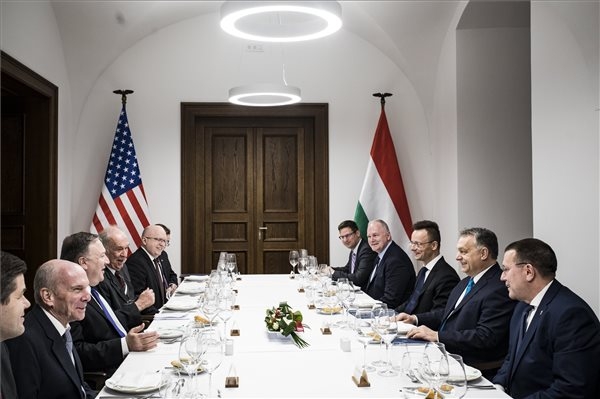 The left-wing nationwide daily reports that Hungary has soothed Washington’s concerns over Russian and Chinese ‘penetration’ with promises to boost economic and military cooperation with the United States.

In his Népszava report on US Secretary of State Mike Pompeo’s talks in Budapest on Monday, András Kósa points out that that the American side refrained from openly criticizing Hungary, while the Hungarian side has announced its decision to buy US-Norwegian-made air defence equipment and its interest in American liquefied shell gas.

He sees Mr Pompeo’s visit as an expression of concerns over China’s and Russia’s active presence in the region, and as an admission of America’s passivity in Central Europe over the past years.

On this issue, he reports, the disagreements remain, with Hungarian Foreign Minister Péter Szíjjártó saying that West European countries entertain much more significant economic relations with Russia and China than Hungary.

Disagreements also remained over Ukraine, as Hungary praised the openness with which the two sides could discuss ‘delicate issues’ like the situation of ethnic Hungarians in Ukraine.

(Hungary has been blocking rapprochement between Ukraine and NATO on account of the Ukrainian law that imposes limitations on the access of ethnic minorities to teaching in their mother tongues.)

Kósa writes that after Washington expressed concerns about Hungary’s attitude through diplomatic channels over the last few months, the Hungarian side has made significant concessions.

Hungary will increase her contribution to military missions in Kosovo and in Afghanistan, for example, and the new bilateral agreement on defence cooperation will soon be submitted to the Hungarian Parliament.

The Secretary of State also met a number of NGOs who have expressed strong criticism of the government, but Mr Pompeo did not publicly raise concerns over those complaints.