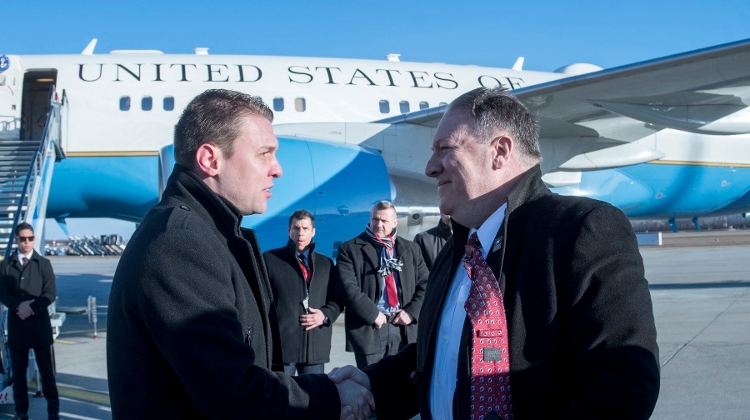 US Secretary of State Mike Pompeo has kicked off his central European tour as the US is trying to counter Russian and Chinese influence in the region.

Hungary and the United States have started to rebuild their political ties, the Hungarian foreign minister said after meeting US Secretary of State Mike Pompeo in Budapest

Péter Szijjártó told a joint press conference that ties had revolved around the pillars of the economy and defence, but ever since the Republican administration assumed power, political relations had started to improve rapidly.

The secretary of state’s visit to Hungary is a testament to this trend, he said.

US Secretary of State Mike Pompeo met representatives of NGOs in Budapest, the Hungarian Helsinki Committee and the Hungarian Civil Liberties Union (TASZ) said in a joint statement.

“Concerns regarding the rule of law and the situation of NGOs were highlighted at the meeting,” the statement said.

That statement also said that co-head of the Hungarian Helsinki Committee, Márta Pardavi, raised issues such as “impairments to the independence of the judiciary and the separation of powers”. It added that she had also raised “government measures that weaken constitutionality and legislation approved in recent years that impairs Hungarian democracy”.

Pompeo also expressed concerns over the growing presence of Chinese telecoms giant Huawei Technologies in the region and Hungary.

The Chinese company plans to establish a European logistics centre in Hungary and will increase its production capacity here this year as well. Huawei has been present in Hungary since 2005.

Prime Minister’s Office leader Gergely Gulyás said on Friday that the cabinet will not review its strategic co-operation agreement with Huawei until a domestic signal is received about a potential problem with that company.

Hungary-U.S. Political Ties On The Mend