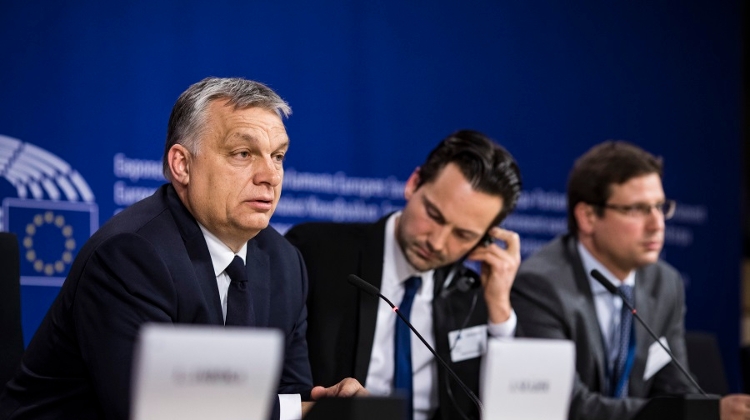 Right after the vote was taken, Joseph Daul, chairman of EPP, wrote on Twitter that “Fidesz will be suspended with immediate effect and until further notice following today’s vote of EPP members (190 in favor, 3 against).

The suspension entails: No attendance at any party meeting; no voting rights; and no right to propose candidates for posts.” Pretty clear, isn’t it?

Western media without exception interpreted the news that way. Politico reported that EPP officials are so angry with Viktor Orbán that, if he “adopts a combative posture,” the next step will be expulsion. With this act, Orbán has lost his “political patron,” observed the article.

The Guardian called the suspension“a significant blow” to Orbán.

But if you ask Viktor Orbán, today’s meeting wasn’t about his party’s indefinite suspension but about “the future of the European People’s Party.”

The next few months will determine whether EPP will survive at all, claims Orbán. The leadership of EPP, supported by the great majority of the member parties, decided “to work on its demise” by insisting on Fidesz’s suspension from the family of Christian democrats. What a gift that is for EPP’s political rivals, he insisted.

Moreover, Fidesz wasn’t actually suspended because, before that could have been done, he himself offered his party’s voluntary retirement from participation in the affairs of EPP.

He also agreed to receive a delegation of three conservative politicians–the Belgian Herman van Rompuy, the German Hans-Gert Pöttering, and the Austrian Wolfgang Schüssel– who, in the coming months, will assess the situation in Budapest.

Orbán has already named his own three wise women and man (Katalin Novák, Judit Varga, and József Szájer), who will “negotiate” with the EPP delegation.

The idea of a delegation of “three wise men” is a copy of the solution the European Union came up with in 2000 during the Austrian political crisis when the same Wolfgang Schüssell, then chancellor of Austria, had to accept an investigative delegation because of his decision to form a coalition government with Jürgen Heider’s Freedom Party.

The delegation found no reason for further action because, at that time, there was no EU law that would have justified engaging in further measures against the Schüssel government.

Of course, we have no idea what conclusion the members of the delegation to Budapest will reach, but I doubt that, given the mood within EPP, they will return with a verdict of full compliance with the values of EPP. This is especially the case since Viktor Orbán swears up and down that Fidesz will not change its position on key issues.

As far as Orbán is concerned, all the criticism against his government is “fake news.” He claims that Fidesz is the party that represents the true values of Christian democracy, that EPP’s present leadership led it astray, transforming it into a liberal party.

He has no intention of adjusting his policies just to please the current leadership. He would like to stay with EPP, but not at any price. He can’t rejoin EPP unless the delegation changes its attitude on the migration question and returns to the true Christian values Fidesz espouses.

You can only guess that whether this is the last word on the subject depends on the results of the May elections and his negotiations with other right-wing parties and groupings.

It doesn’t matter how valiantly Orbán tries to hide the truth, this suspension is an unexpected blow. Up until the very last minute he was hoping that support for Fidesz’s suspension or expulsion was not as strong as it turned out to be.

The hope was that CDU and CSU would stick by him and that those small Benelux parties that were insisting on Fidesz’s expulsion would be in the great minority. It didn’t work out that way.

For Orbán, this is a serious loss of political power both at home and abroad. Only total astonishment can be expressed that there are journalists in Hungary who see the results as a great victory for Orbán, who is “one of the best practitioners of Realpolitik” anywhere in the world.

One of these people is Péter Pető of 24.hu, who naively believes that those journalists working for Magyar Nemzet, Origo, Pesti Srácok, and so on “made asses of themselves when they urged him to leave EPP.”

Does Pető really believe that these hack journalists conduct their propaganda on their own?

He is not interested in anything else but in acquiring the toolbox necessary for power, which happens to be the European People’s Party.” After this humiliation, does he really think that Orbán will be able to remake EPP in his own image?

It was not only the enthusiastic right-wing hack journalists who urged Orbán to leave EPP. Gergely Gulyás, his chief-of-staff, only a few hours before their departure for Brussels, said that “Fidesz will immediately leave EPP if it is being suspended.”

Pretending that the suspension is actually not a suspension doesn’t strike me as a brilliant move on the part of the best practitioner of Realpolitik in Europe. Most sane people, like Ildikó Lendvai, former chairperson of MSZP, called the story of the pseudo-suspension “a funny episode in the drama.” Very rightly she called it “a communication crutch” for domestic purposes.

The assumption, also advanced by Pető, that the decision to suspend Fidesz from EPP was necessary to ensure that Weber becomes the next president of the European Commission, is questionable.

Manfred Weber almost certainly will not sail into the position without the help of other parties. For example, only yesterday Frans Timmermans, the socialist candidate for the job, said in an interview with Frankfurter Allgemeine Zeitung that “as long as EPP’s top candidate, Manfred Weber, does not clearly announce that he will not work with the far right, I will have nothing to talk with him about.”

Thus, the final EPP decision is still ahead of us, probably post-election. This is just one chapter in the continuing saga of EPP and Fidesz.