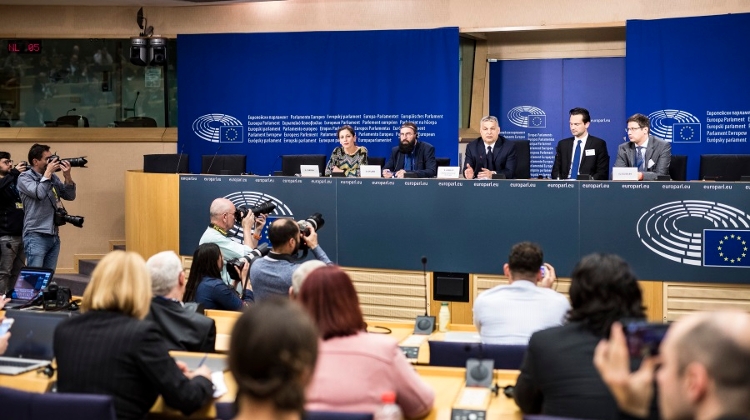 “The European People’s Party made the right decision today, because it maintained its unity,” Prime Minister Viktor Orbán said at an international press conference after an EPP meeting in Brussels on his Fidesz party’s future in the centre-right bloc.

He said the EPP had also made the right decision in the sense that the grouping would now be able to tackle the European parliamentary election campaign as a cohesive unit and because Fidesz could continue to support Manfred Weber as the EPP’s spitzenkandidat.

Fidesz and the EPP, he said, had “not closed off any paths”, and would be free to decide on their relationship after the elections.

Orbán called Wednesday’s EPP’s debate “very interesting, exciting and instructive”. He said the EPP’s future had been “called into question” in recent weeks and this is what Wednesday’s debate had been about.

He said Fidesz, like the EPP, had appointed “its own committee of three wise people” to be chaired by state secretary for family and youth affairs Katalin Novák.

Judit Varga, state secretary for EU relations at the Prime Minister’s Office, and Fidesz-Christian Democrat MEP József Szájer will be the other two members.

Orbán said the three of them would be the ones to hold talks with the EPP’s committee and draft their own report on how the EPP and Fidesz’s relationship should be shaped, whether Fidesz has a place in the EPP and if so, what kind of an EPP that should be.

He called the EPP an “unprecedentedly brave venture”, pointing out that it was a grouping ranging from “liberal left-wing parties” to Christian conservative right-wing parties “like ourselves”.

He said it was the pursuit to keep these parties together that made the “experiment” he said was the EPP special.

This has worked out reasonably well in the recent period, Orbán said, adding that it was this that had turned the EPP into the top political force in European politics.

The prime minister added, at the same time, that in recent weeks, thirteen parties from “the leftist-liberal branch of this colourful community” had proposed that “those who are firmly on the Christian conservative side” should be expelled from the EPP.

“Those are us,” he said. Orbán said certain political forces were looking to turn the EPP into an organisation “with a much narrower profile whose centre of gravity is not where it is now but much further to the left, in a liberal direction”.

He said that while the stakes of Wednesday’s debate had been the future of the EPP and its ideological character, another question had been whether the EPP would be able to restore its unity for the European parliamentary elections.

Orbán also said he had asked the heads of the thirteen parties to withdraw their proposal on Fidesz’s expulsion because “this isn’t good in terms of the campaign, nor is it good for the EPP in the long run, but they weren’t willing to withdraw it”.

If they had withdrawn the proposal, there would not have been a need for today’s debate, he argued. “We want the EPP to remain the strongest party in European politics and to be able to mount a united campaign,” Orbán said.