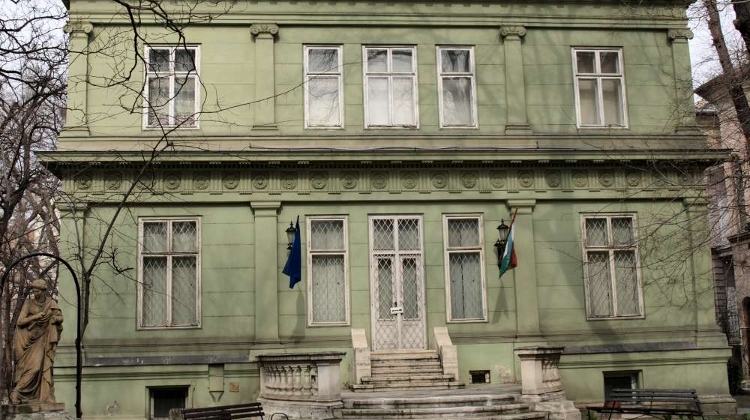 David Holzer embarks on a pilgrimage to discover the differences between Szecesszió and Art Nouveau.

On a wonderfully gloomy late January afternoon, I made my way through a Budapest neighborhood of large villas. Some looked abandoned, others were marked by the flag of a foreign power. All had seen better days.

I walked into up Városligeti fasor in a stiff wind that promised rain. My destination was the György Ráth Villa, once a family home but now a museum to Art Nouveau, in particular Hungarian Szecesszió, or Secessionist art. I found it opposite the Reformed Church, itself an intriguing building.

Although I’d been told that the Szecesszió was Hungary’s take on art nouveau, I hadn’t been able to establish what the difference was between the two in my own mind. I hoped that all would be made clear at the villa. I was not disappointed.

Viewed from the path, beside a patch of grimy snow that refused to melt, the Ráth Villa looked small. This was a good sign. I had not yet had lunch and my stomach was beginning to protest discreetly.

It looked like I could be in and out of the Ráth Villa in an hour at the most. I was confident I’d leave enlightened but not exhausted. This turned out to be the case.

Secessionism is a broadly Europe-wide art movement that began in France and spread across the continent in the late 19th and early 20th century. Somewhat paradoxically, it rejected tradition in favor of the modern, but also harked back to bygone ages.

I would guess that the spark for Hungarian Szecesszió was the Viennese Secession, although I do feel somewhat disloyal in writing this. I would love to know if the influence ever went the other way, from Hungary to Austria and beyond.

A leading light of the Vienna Secession, which manifested its rebellion against the stuffiness of the mainstream art world in the form of Art Nouveau, was the great Gustav Klimt. Think of the infinitely reproduced The Kiss (1907/08).

Art Nouveau can be crudely defined as a highly decorative style inspired by natural shapes. This gave it a free-flowing sensuality that was combined with a romantic sensibility derived, I think, from the British pre-Raphaelites. Hungarian Szecesszió added the influence of oriental design and the not insignificant contributions of this country’s folk art.

The difference between what was produced in Hungary and the rest of Europe became clear as I sauntered around the Ráth Villa. Work by British textile designer William Morris and his followers in the Arts and Crafts movement was displayed adjacent to American Tiffany Lamps, which first appeared at the end of the 19th century.

Towards the end of my visit, I was sitting on a clear Perspex chair usually occupied by the security guard, who had a face like a friendly film noir conman. I was trying to imagine what the villa would have been like when the Ráth family was in residence, when I became aware of an oddly familiar piece of music echoing through the house.

An electric piano that sounded like rain falling tinkled over an insistent bassline and skittering drums.

Right then I couldn’t pin down what the music was, but it was a perfect fit with the mood inside the Ráth Villa that afternoon, which was oddly, sweetly sad.

What, I wondered, happened to the Ráth family when World War One came and was followed by the tumult of the years before WWII. Where did they end up? Who of the family is left today?

Just before I left, I came across a room not much bigger than a cupboard. This was where the music was coming from. It was part of the soundtrack to an educational movie in Hungarian.

The music was a loop of the intro to “Riders on the Storm” by The Doors. Here, in the Ráth Villa, it made more sense than it ever had the countless times I’d heard it before.

Munching on the Modern

Stepping out of the Ráth Villa, I was instantly hungry. I headed for Petőfi Sándor utca, just down from Deák Ferenc tér. This street boasts, to my eye at least, a fine example of what is either Art Nouveau or Szecesszió architecture. It’s also the home of the ultra-modern Kajahu restaurant.

Kajahu’s gimmick, which it doesn’t need, is that you order using a computer set into your table, like one of those old-fashioned Asteroids video games. Unless there’s a virus in the machine, there’s no chance of your order being wrong.

This is an ingenious idea and I’d assumed, because of this, that Kajahu was part of a big chain. It isn’t. Yet. It’s the brainchild of Hungarians, and its parent company, CyBERG, is traded on the Budapest Stock Exchange.

According to a recent article on bbj.hu, Kajahu has cleared a franchise to open in the Parndorf Fashion Outlet in Austria, near the border with Hungary. CyBERG also signed a franchise agreement last year for 73 Kajahu restaurants to open in Austria, Czech Republic, Poland and Slovakia by 2030.

Thinking back to my question as to whether art movements began in Hungary and emanated outwards, I found the idea that Kajahu is a pioneer somehow heartening. It’s about time Hungary had its own international chain of restaurants.

The food is simple and healthy, with a decent enough choice for vegetarians. There’s also a small deli at the back of the restaurant. It was afternoon when I was there but in the evenings there’s often a DJ. Fortunately, the music tends towards the mellow and is, in any case, not at all obtrusive.

If you fancy, you can also cook your own food at Kajahu and invite your friends along. No doubt this is not an idea that’s unique to Kajahu, but I’ve not seen it done anywhere else in Budapest.

Sitting in the clean, well-lit space of Kajahu, fiddling with my mouse mat with one hand while I munched on a pretty good vegetarian burrito with the other, I allowed the admittedly pleasant sense of fin de siècle gloom that had settled on me since the Ráth Villa to drift away on a cloud of shiny modern optimism.

The György Ráth Villa is at Városligeti fasor 12, with the nearest metro stop Kodály Körönd. Kajahu is at Petőfi Sándor u. 11.