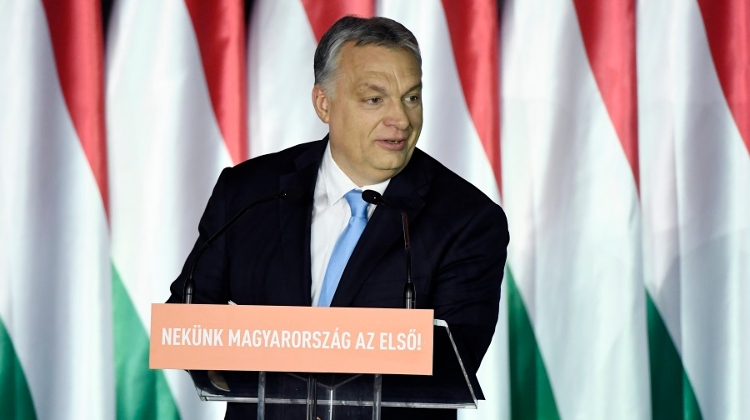 The first part of the proposal calls for stripping “Brussels bureaucrats” of their power to manage the migration issue and giving that competency back to the European Union’s member states.

He said no country should be forced to take in migrants against its will and no one should be admitted to the EU without valid documents. The EU should also stop issuing prepaid debit cards and “migrant visas” to migrants, Orbán said.

Neither should the bloc give any more money to organisations linked to US financier George Soros, which the prime minister said promoted immigration. Instead, he said, these groups should pay for member states’ border protection measures.

Further, no one should face discrimination for identifying as a Christian, Orbán said, adding that EU institutions should have anti-migration leaders. The prime minister said these measures were crucial for stopping immigration and preserving Christian culture, and asked voters to back his party’s programme.

“Our Christian civilisation is at stake in the upcoming European parliamentary election,” Orbán said.

The election will decide if the EU has “pro-migration or anti-migration” leaders in future, whether “Europe continues to belong to the Europeans or to masses from another civilisation; whether we can save our Christian, European culture or give up the ground for multiculturalism,” the prime minister said.

Orbán added that “discontent with Europe’s elite is mostly rooted in their treatment of migration”. What Europe is facing is not just a migration crisis but a migration of peoples in the historical sense, he suggested. Europe, he went on to say, could stop mass migration “but it has not even made an attempt; the European Union’s incumbent leaders support and encourage migration.”

Orbán criticised Brussels for not focusing enough on family policy, pointing out that at the same time the EU regularly emphasises the importance of legal migration. He said the EU’s programme of legal migration was actually a “front” for replacing Europe’s population with immigrants.

“We Hungarians have lived here in the Carpathian Basin for a thousand years … and we want to remain here and preserve our borders for at least another one thousand years,” the prime minister said.

“We want the next generations, our children and our grandchildren, to be just as free to make decisions about their lives as we are.”

As regards the outgoing European Commission president, Orbán called Jean-Claude Juncker an “authentic socialist” who bore heavy responsibility for Brexit, “the migrant invasion” and the “growing conflict” between central and western Europe.

“There is an error in the appliance of the Brussels elite,” he said, adding that there was a “bubble”, or “virtual world” in Brussels that refused to accept reality.

This was why, Orbán said, it was possible for EPP group leader and spitzenkandidat Manfred Weber, who he noted was a Roman Catholic Bavarian, to “insult” the Hungarian people.

Orbán noted that Hungary has been at odds with Brussels on various issues for nine years now, adding that these disputes were always about the Hungarian government’s refusal to “do as Brussels dictates” if it believes that something would be against the interests of the Hungarian people.

The prime minister summed up the achievements of the Juncker commission saying “the British are leaving and the immigrants have come in”.

Concerning the future of the bloc, Orbán criticised the concept of the “united states of Europe”, which he said was a power ambition of the “Brussels elite” against nation states.

“The European dream is broken,” he said, citing a recent study by the Századvég Foundation, which found that EU citizens no longer believe that future generations will be better off than the current one.

Orbán said western Europeans tended to be more pessimistic about the future of the bloc. The majority of Europeans also believe in preserving the continent’s Christian culture and traditions, Orbán said, pointing out that 80 percent of Hungarians share this view.

Europeans oppose immigration, he said, adding that European Commission First Vice-President Frans Timmermans, the lead candidate of the European Socialists, on the other hand, was in favour of it. “It’s understandable that Juncker and Timmermans are together all the time,” Orbán said.

“The only question is how the EPP’s Manfred Weber can come together with someone like this.”

The prime minister called on voters to “show Brussels” in the election that it was the European people, and not the “Soros-affiliated NGOs and Brussels bureaucrats” that had the final say in the EU’s affairs.