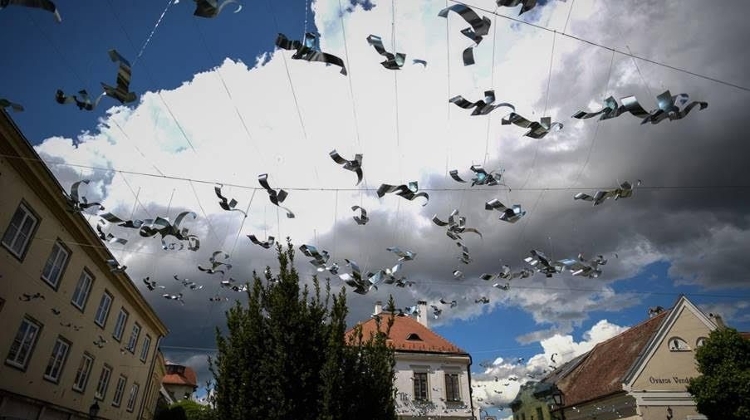 Now on until the first week of June. To celebrate the 30th anniversary of the 1989 regime change in Hungary, Veszprem is hosting Think Freedom, an urban spectacle and multidisciplinary art installation by renowned American artist Edina Seleskovic, on Szabadsag ter in Veszprem, according to a press release sent by the U.S. Embassy.

The piece is supported by the U.S. Embassy in Hungary and was created in partnership with the City of Veszprem and in collaboration with young people from six Hungarian cities.

U.S. Embassy Cultural Attaché Emma Nagy opened Think Freedom on May 10, stating that “the Embassy is thrilled to support such a thought-provoking public project that reminds all of us and future generations of the values and freedoms we share and cherish as Hungarians and Americans.”

The installation is a reflection on the meaning of freedom, incorporating sculpture, performance, light, sound, film, the literary word, and new global communication technologies, and connects young generations with the universal power of art. It will remain in Veszprem until the first week of June 2019.

Renowned New York-based sculptor Edina Seleskovic joined hands with young people from six Hungarian cities - Veszprem, Budapest, Szeged, Debrecen, Pecs, and Zirc - to create an urban spectacle that connects people globally through art creation, and to remind youth across Europe and the United States of the freedoms we have enjoyed together for thirty years.

Think Freedom is an installation composed of several thousand sculptures of peace, constructed individually from silver colored metal and suspended in an enormous flock representing freedom without borders: a flight moving forward – moving toward a brighter future.

Each piece is a symbol, as it is formed from two metal strips, like two hands or two messages, twisted individually into a recognizable shape of a bird. However, this work is more than its aesthetic aspect as each sculpture, each element of the installation, carries a handwritten message of freedom on its wings.

Edina opened a dialogue on the idea of freedom today and in the historical context of 1989 with workshops and public talks in six Hungarian towns, reaffirming that art is how we break down borders and barriers around us. Young people and the public from these cities wrote about their ideas of freedom and their views of the future.

These messages are now written on the installation’s sculptures, together with messages from all previous host cities, and will continue to other cities, strengthening universal understanding of the power of art for younger generations.

Hungarian art students and young artists designed the installation in Veszprem county, making this work authentic to the City of Veszprem and Hungary. "I feel privileged to have so many Hungarian young people share their thoughts and ideas with me,” Edina said.

“Seldom do we think about our freedom during our hurried everyday lives, and Think Freedom made us all pause and consider that which is so easily lost and so difficult to obtain. I am thrilled that we have an open dialogue and honest messages on our installation in Veszprem. Many may be surprised by them."

Think Freedom will continue to travel, and its final presentation will take place in 2022, in New York at Daag Hammerskjold Plaza, overlooking the building of the United Nations.