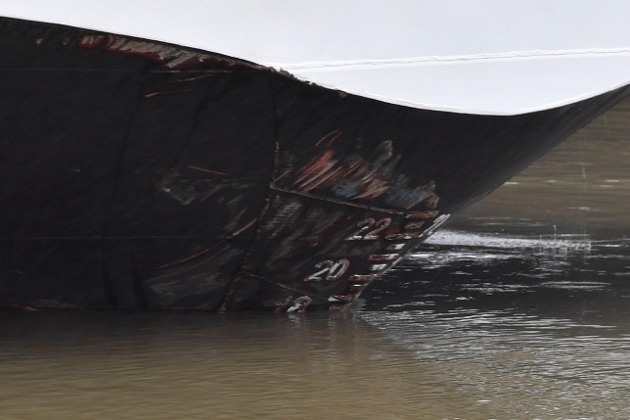 An investigation has revealed that the captain of a cruise ship which crashed into a sightseeing boat in Budapest last week deleted data from his mobile phone after the crash, the Budapest prosecutor’s office said on Thursday.

Top picture shows marks on Viking Sigyn after the accident: photo by Zsolt Szigetváry for MTI. The Ukrainian captain of that vessel, a Swiss-registered cruise ship, has been detained.

Additionally, official information acquired through the Hungarian member of Eurojust has confirmed press reports that the captain had been a suspect in the Netherlands for causing a crash on April 1, the prosecutor’s office said.

The Budapest 6th and 7th district prosecutor’s office will add this supplementary information to an appeal submitted against a court decision that opened up the possibility for the captain to be released on bail.

The Budapest chief prosecutor will set up a group of investigators, including five prosecutors and deputy prosecutors, to analyse and assess the case, the statement added.

Seven passengers were rescued. Thirteen are still missing. With the last two — as yet unidentified — bodies, the number of the dead rises to 15.

The video below by Arirang News reports that a huge floating crane arrived in Northern Budapest on Wednesday and is waiting for water levels to subside so it can safely reach the site of the accident.

The Korean embassy's defence attache told reporters in Budapest that authorities from both countries are trying to prevent the loss of bodies by securing the vessel and preparing for a salvage mission.

As of Wednesday, search and rescue teams found three more bodies, all of them South Korean, raising the official death toll to fifteen.