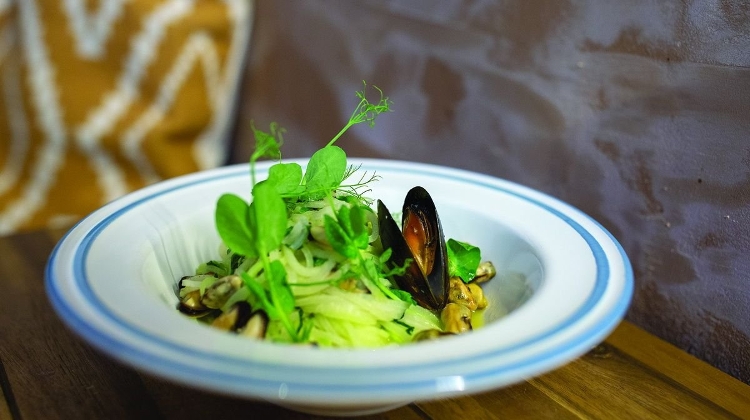 Looking for a secret tip for a Budapest restaurant that combines international taste with traditional Hungarian gastronomy? Then give Frankó Kitchen a chance, writes The Budapest Times.

Take care though – this is top-secret, as the restaurant that opened in mid-2018 belongs to the gastronomic underground movement – or at least it’s situated under the ground, in the lower ground floor of a classicist house at 20 Frankel Leó Street.

Surely there are a few good reasons for placing a restaurant below street level, but let's be honest: most of them never really manage to pull off that basement charm. Except for the Frankó Kitchen!

Despite its underground location, the small establishment offers a fresh ambience that stands up to any interior design catalogue, with its cosiness carefully planned down to the last detail.

Kinga Erdős is the person responsible for this feature. She and her husband, Dávid Szakonyi, opened their own restaurant getting on for a year ago. Their aim was to become a location for everyday pleasure.

Between junk and designer pieces

The word "Frankó" in the name comes from Hungarian slang meaning something like "cool" or "great", the couple explain. "Furthermore we were also playing with the similarity to the street name, Frankel Leó Street," Erdős adds.

Especially fans of eclectic country style will find that Frankó Kitchen is really cool. As the two owners tell us, most of their furniture – for example the large old-fashioned cupboard – and most of the decorations were found at flea markets.

"The best way is to visit small Hungarian villages, where you can find really original pieces," Erdős knows. Some of the coffee and espresso cups also came from the flea market and so no two are the same, which adds a certain bohemian charm.

Other pieces of furniture were tailor-made for the restaurant, such as the blue velvet upholstered chairs, the tables and the huge mirror, which crucially boosts the lights in the room with its background-illuminated frames.

"It was primarily Kinga who took care of the interior design. She simply has the talent for it," Szakonyi explains, shifting a little embarrassedly from one foot to another. However, he lights up when it comes to talking about the menu.

Szakonyi is a chef with all his mind and soul. He has been working in gastronomy for more than ten years, starting his career at famous Budapest restaurant Rosenstein.

Later he spent five years at Boscolo Hotel's Salon Restaurant, where he was responsible for preparing the daily amouse bouche. "This work really improved my creativity," he believes. "I got the ingredients for the day every day and I had to work some magic with what I had."

The chef preserved his talent and most of all his love for improvising in the kitchen. At his own restaurant he would prefer to compose a completely new menu each day. To a certain extent he does, since one of the specialties of the house is the weekly – or in practice continuously – changing daily offer.

These dishes, which are only available at lunchtime, are composed by Szakonyi using the freshly available ingredients from the market each week. They always offer a soup and another appetiser, three main dishes that often include a vegetarian option, and two desserts.

As opposed to the lunch menu, the fixed, only seasonally adjusted menu is much more complex. Szakonyi offers specialties here that generally cannot be found elsewhere, such as an appetiser of pork brain poached in sour cherry beer, or roasted rabbit liver on a bed of salad, apples and strawberries.

If you would like something more conventional, you could try the prelude made of duck liver cream with onion marmalade and fresh raspberries.

Among the main dishes guests can try, for example, the juicy lamb shanks in "vadas" style with potato dumplings and salad, or the pink duck breast with cauliflower risotto, oranges and field beans.

One of the highlights among the á-la-carte dishes are the juicy black mussels with turnip cabbage spaghetti. Szakonyi first prepares the mussels with a bit of white wine and garlic in a pan, before adding the vegetable noodles to be steamed in its broth. The result is just as intensive in taste as it's healthy, and is absolutely trendy in terms of low-carb eating.

For desserts a chocolate fondant with fruits and a little exotic celery mousse with caramelised rye bread crumbs and pickles are served. This might sound a bit off the chart at first – and it admittedly is – but it tastes surprisingly good. The sweet vegetable offers a great light alternative to the traditional heavy desserts, especially in summer.

A small but fine selection of wines is offered, most from small Hungarian producers and which the couple enjoy themselves.

Soon enough, Franko Kitchen won't be part of the proverbial underground anymore, since the fan community of the small restaurant is growing steadily. Both at lunchtime and dinnertime almost all the tables are always busy. If you don't want to try your luck, a reservation is recommended.

The restaurant's seats on the recently reopened street terrace are especially attractive, as they enjoy a lot of sunshine at lunchtime.

Although the regulars are really fond of the place, we have to admit that chef Dávid Szakonyi's sophisticated and creative cooking is not for everyone. You cannot find any schnitzel or chicken breast here.

This place is primarily – of course not exclusively – for connoisseurs who value special ingredients such as pork brains, marrow and haslets, and who are open towards unconventional tastes.

If you can handle this you can expect a real culinary adventure with dishes you would usually expect to see on the plates of the star-awarded restaurants.