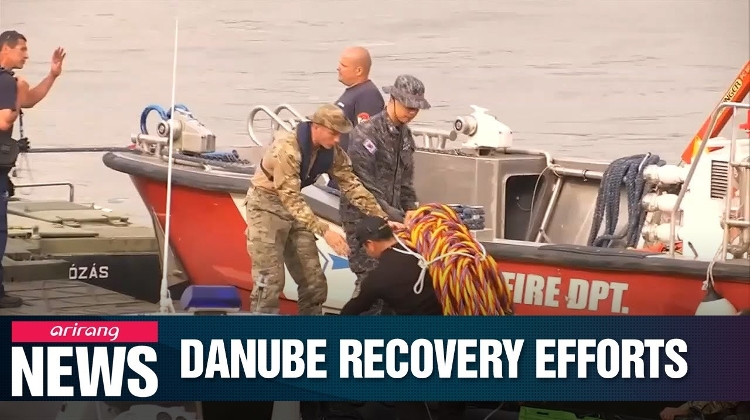 Almost a week after a tour boat sank on the Danube River in Hungary, rescue teams found three more victims of the tragic accident on Tuesday, bringing the confirmed death toll so far to 12.

South Korean officials in Budapest say two bodies were found at around 1pm and 3:30pm local time on Tuesday, roughly 50 to 55 km downstream from the site where the tourist boat capsized on the Danube.

Both were confirmed as South Korean men, the former had been in his sixties and the other in his twenties.

Another body, also presumed to be a Korean national, was discovered at around 2:30 PM at the accident site, stuck between glass doors of the submerged boat.

This brings the official death toll to twelve,... out of the 35 people who were on the boat -- who were all South Korean except two Hungarian crew members.

A Seoul official said authorities have identified nine of the deceased victims discovered as of Monday.

The official said the victims' families are being consulted with on the funeral procedures, and their bodies are likely to be returned to South Korea within the week.

Meanwhile, Korean and Hungarian authorities have agreed to begin operations to lift the wreckage, which sits nine meters below the water's surface.

Efforts to salvage the vessel are expected as early as Thursday, once a huge floating crane is delivered to the scene.

The crane can lift up to 200 tons at a time, and authorities expect the wreckage to weigh roughly 100 tons.

However, there are concerns the crane may take more time to reach the accident site,... due to the high water levels on the Danube, which will make it difficult for the crane to pass under bridges on the way to Budapest, reports Arirang News.