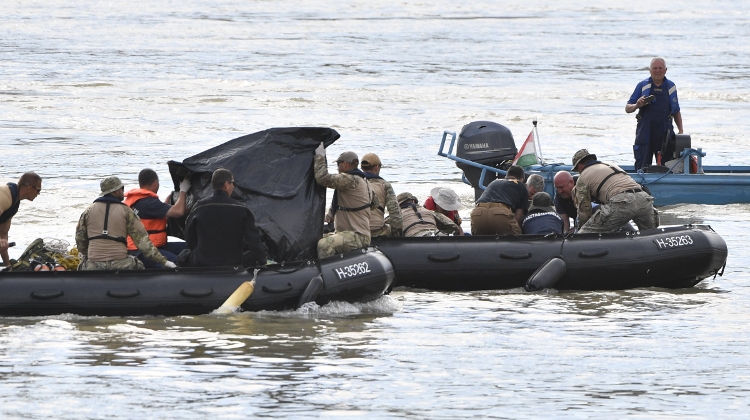 Rescue teams working to salvage the wrecked Hableány, which sank in the Danube last week, are awaiting the arrival of a crane large enough to lift the boat from the river, the head of Hungary’s counter-terrorism force TEK said.

János Hajdu said the crane, which could lift 200 tonnes, could not at present be shipped to the site under the bridges due to high water levels.

He said divers first attempted to approach the wreck on Thursday, adding, however, that the swift current of the flooding river and “practically zero centimetre sighting distance” in the 12-15°C water made their work nearly impossible. He added that divers are forbidden to enter the wreck for their own safety.

The salvage operation, assisted by a 54-strong South Korean team and Austrian experts, will focus on lifting the wreck out of the water in one piece, he said. Shunkeun Song, defence attaché at the South Korean embassy in Budapest, thanked the Hungarian government for its assistance and Hungarians for expressing their sympathy over the accident.

The diplomat said that families of the victims were eager to receive information and asked Hungarian authorities to allow South Korean divers to enter the wreck. He voiced agreement with Hajdu, at the same time, that protecting the lives of divers was paramount.