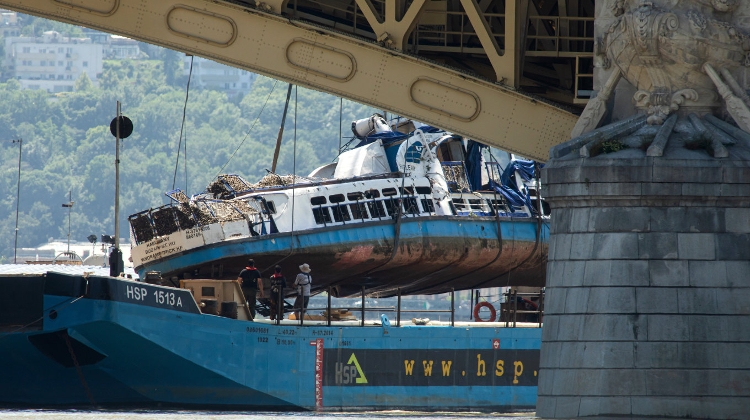 Salvage crews have finally recovered the wreck of the boat which capsized two weeks ago on the Danube under Margaret Bridge with a group of South Korean tourists on board.

Four bodies have been recovered since crews started operations to lift the wreck early on Tuesday morning, officials said.

One of those recovered has been identified as that of the only child on board at the time of the collision, public broadcaster M1 reported.

It sank after a Swiss-owned cruise ship collided into it as both vessels passed under Margit Bridge in Budapest. It had a group of 33 South Korean tourists and a crew of two Hungarians aboard.

High waters delayed the salvage operation for nearly two weeks. The salvage took place in several stages, during which the state of the ship was assessed at several points.

M1 reported on Tuesday afternoon that the barge carrying the wreck was on its way to the Csepel port in the south of the city, where the boat will undergo further examinations.

The Hableány will be examined by nautical and technical experts, in collaboration with staff members of the prosecutor’s office.

At the request of the interior minister, the number of police officers taking part in the search for remaining victims has been doubled.

The Ukrainian captain of the hotel ship which struck the Hableány, causing the disaster, is currently the only suspect, he said.