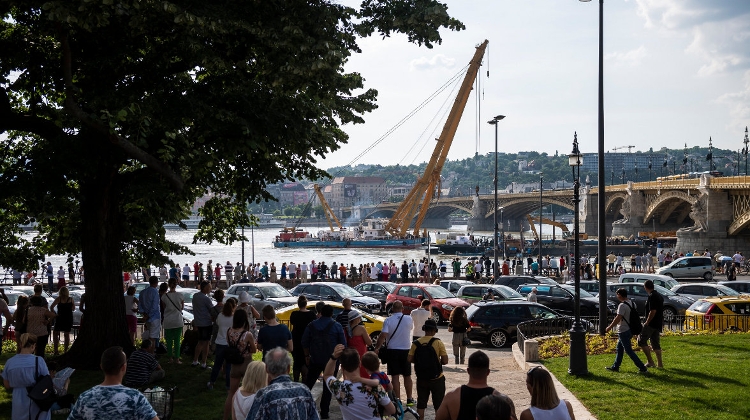 The wreck of the Hableány, a sightseeing boat which sank in the River Danube in central Budapest with a group of tourists aboard, could be lifted to the surface “in the foreseeable future”, an official of the counter-terrorism force (TEK), which is in charge of the salvage operation, told a press conference.

Nándor Jasenszky said that the four harnesses necessary to lift the wreck are now in place. The large crane to be used in the operation will soon take its final position, and the experts will align and fix the four ships that will lift Hableány from the river bed, he said.

He noted that the boat had been used for 70 years, and it was not known what damage the collision had done to its structure.

The salvage operation is aimed at lifting the wreck in one piece, he said, adding that it was “very likely” that the bodies of further victims of the collision would be found inside the wrecked vessel.

The exact date has not been determined as yet, but TEK “will be bent on” completing the operation as soon as possible, he said.

He said the cool temperatures of the morning hours would be good for the operation, and added that they would not attempt to lift the wreck at night in bad visibility.

Meanwhile, Hungary’s authority for air transport restricted the country’s airspace above a section of the Danube with a view to preventing the disruption of recovery efforts.

The restricted zone extends from about 1 km north of Budapest’s Árpád Bridge down to the city of Paks, about 100 km south of Budapest, and in about a 2-kilometre radius east and west of the river.

At the time of the collision Hableány had 33 South Korean tourists on board and a crew of two Hungarians.

Seven tourists were rescued from the water after the collision. The bodies of 19 tourists and one of the Hungarian crew have been found and identified, while a search is still under way for 8 missing persons.