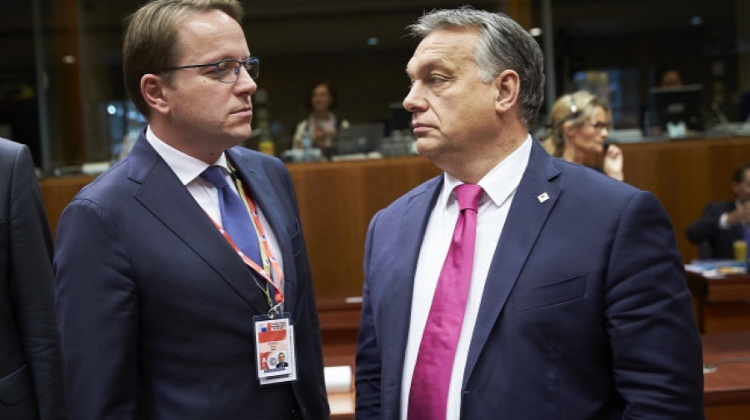 The European Parliament’s foreign affairs committee has approved Hungary’s candidate for European commissioner after coordinators of the legislative body’s political groups accepted Olivér Várhelyi’s (pictured on top left) answers to the additional written questions he was given following his hearing last week.

The European People’s Party‘s parliamentary group said on Twitter that the foreign affairs committee had backed Varhelyi’s candidacy with a two-thirds majority as required for his approval as commissioner.

The EP’s Conference of Committee Chairs is expected to review the evaluations and recommendations given for the commissioner candidates and bring a formal end to the hearings on Thursday. At last Thursday’s hearing, Várhelyi vowed to carry out his duties as commissioner independently of any government, emphasising his intention to follow the EU’s policy objectives.

European Commission President-elect Ursula von der Leyen’s team must also be approved by the EP plenary. The vote is expected to be held on Nov. 27. In reaction to Várhelyi’s approval, the Government Information Centre said the Hungarian opposition’s “scheming” to prevent Hungary from sending a commissioner to Brussels had failed.

“The government welcomes that the European Parliament’s foreign affairs committee has supported Olivér Várhelyi’s appointment as European commissioner,” the centre said in a statement. Hungary considers the EU’s neighbourhood and enlargement portfolio crucial in terms of strengthening the bloc, the integration of the Western Balkan region and the defence of the Balkan migration route, it added.

“Now that he has renounced [Prime Minister Viktor] Orbán’s policies not just verbally but also in writing, the Hungarian commissioner will still be closely watched in his work,” Ujhelyi said in a statement. He warned that Várhelyi “mustn’t stray a single step from the European path laid out both by the EU treaties and himself for the coming years”.

Jobbik MEP Márton Gyöngyösi expressed hope that Várhelyi would dispel concerns that he is a “partisan soldier” and would “go from serving those above him to helping those under him”. Klára Dobrev of the Democratic Coalition (DK) said Varhelyi “is visibly well versed in Orban’s peacock dance and double talk”.

“One thing I will promise,” she said in a statement posted on social media, “is that DK’s MEPs will keep an eye on him.” Dobrev said DK would immediately initiate Varhelyi’s removal from office if he ever violated his duty of independence.