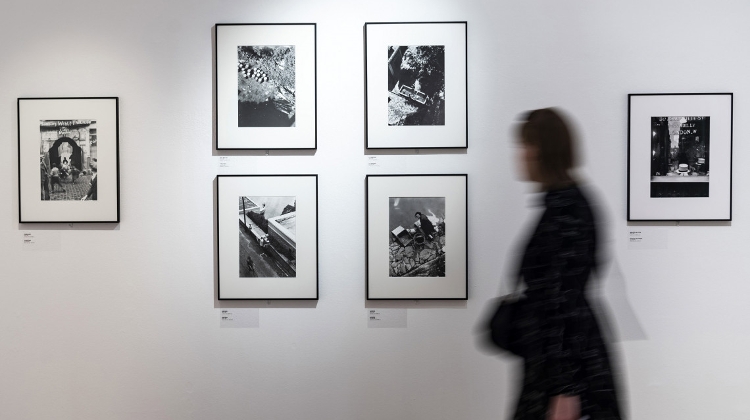 Now on until 12 May. The corpus preserved at the Hungarian Museum of Photography contains photographs from Moholy-Nagy’s European period, conceived between 1922 and 1937.

The exhibited photographs provide detailed and thorough insight into Moholy-Nagy’s work in the field of photography, which reformed and greatly influenced modern visual art.

Although it is more than probable that Moholy-Nagy never enlarged, developed and fixed photographs in the darkroom and never considered himself an art photographer or a photographer as such, he had indubitable impact on photography in the modern era and onwards.

The first section comprises photogram experiments he commenced in 1922 with his wife, Lucia Schultz.

The photographs made without using a camera, “light drawings” in the literal sense, are accompanied by a screening of Moholy-Nagy’s short film Lightlplay: Black-White-Grey. The film presents the functioning of, and the light-shadow display created by, the Light Space Modulator, which can be associated with photogram experiments as the summary and manifestation of their light- and object-centeredness.

The second section contains the photoplastics, unanimously considered László Moholy-Nagy’s “discovery” and innovation by relevant literature. These are infused with personal themes on the one hand, and composed of the contemporary pop culture of the twenties (magazines, public advertisements, newspaper ads) on the other hand.

The image type referred to as photoplastic, which Moholy-Nagy calls photo montage in his 1947 book Vision in Motion, has special importance in terms of his oeuvre, because as opposed to his practice of giving neutral titles to his other kinds of work, in the case of his photoplastics, he gave titles aiding interpretation while also conceivable as part of the work itself.

The third section of the exhibition presents other experiments and abstractions by Moholy-Nagy, most of which illustrate the imaging endeavours and experiences gained throughout his photogram experiments. Such are the positive prints displaying negative images, creating new, unusual secret worlds with ingenuity.

His photographs of various surfaces are also displayed here, with the playful yet serious formal features seen in his photograms recurring in surfaces of walls and sidewalks, in a drain grate or in the piece of land beneath the Berlin radio tower.

This section also includes Moholy-Nagy’s more personal photographs, often taken as a flaneur during his travels, which are equally characterized by unusual imaging methods, compositional features such as worm’s- or bird’s-eye-view, often referred to as Bauhaus style in photography.

In creating his photographs, László Moholy-Nagy always endeavoured to realize the theoretical proposition he had outlined in his first independent publication on the pages of De Stijl in 1922, titled Production-Reproduction: tools used for the purpose of reproduction, including the photo camera, should be used for productive, in other words, creative purposes.

We believe that the corpus of photographs preserved at the Hungarian Museum of Photography, and now presented for the first time in Budapest, is an authentic confirmation of the above idea.

On the 100th anniversary of László Moholy-Nagy’s birth, the Hungarian Museum of Photography staged an exhibition titled László Moholy Nagy: 100 Photos, presenting a selection of the artist’s photographic oeuvre that had mostly remained unknown in Hungary.

As a result of a professional collaboration with Hattula Moholy-Nagy, the versatile artist/theoretician’s daughter, the new prints enlarged for the exhibition in 1995 from the negatives in her possession were donated to the Hungarian Museum of Photography along with a number of photoplastics and photograms made in 1973.

Augmented with the new prints, the photographic collection had already included eight stamped vintage prints, some of them autographed by László Moholy-Nagy, which make the collection invaluable. Notwithstanding, the corpus has never been put on display in Budapest – up until now.

With the exhibition of this collection, Mai Manó House celebrates the centennial of Bauhaus as well as the photographic oeuvre of László Moholy-Nagy, the institution’s ‘youngest professor’, who inspired theoretical and practical interest towards the medium of photography.