'Dancing On The Square: Music Of Freedom', St. Stephen’s Basilica In Budapest, 16 June 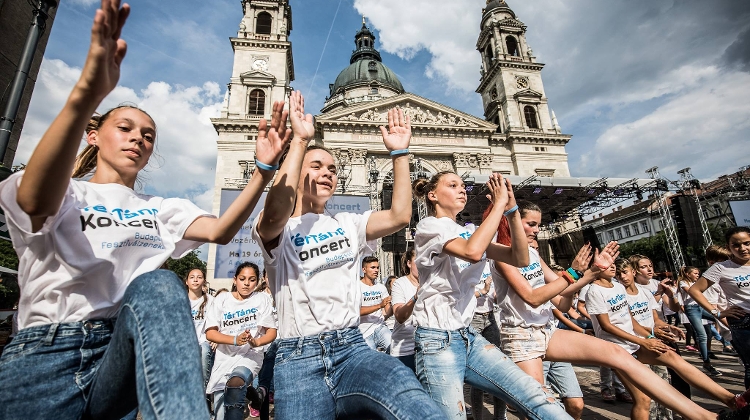 Iván Fischer and the Budapest Festival Orchestra is organising the fifth Dancing on the Square programme in 2019. At the free, open-air concert hundreds of children coming from underprivileged areas of Hungary are dancing together – this time to the 7th symphony of Beethoven.

They are Hungarians, they are world-famous, and they are giving a free concert in the heart of Budapest.

19th century rock music, one of the world’s top orchestras, Iván Fischer and 400 dancing children – these are the essential ingredients of this year’s Dancing on the Square concert, organised for the fifth year in a row.

The Budapest Festival Orchestra will be holding the free outdoor event on 16 June at 7 p.m. and looking forward to welcoming those who would like to listen to a live performance of Beethoven’s Symphony No. 7 on the square outside St. Stephen’s Basilica.

“The piece is a perfect choice for this event because it’s a celebration of dance. The children will be dancing to the last movement, which is very much like 19th century rock music. Beethoven has always stood for freedom and exultation, as also illustrated by this symphony”, says Iván Fischer, Music Director of the BFO.

Children will be coming from 22 places across Hungary – from Drávafok through Sajószöged to Tiszaszalka – to participate in the concert.

Each child has their own story: whether Roma or not, many have disadvantages or multiple disadvantages, and most of them are visiting Budapest for the first time.

The dancers include some more privileged children from an elite high school in Budapest, who have been preparing for the performance for half a year alongside the rest of the kids.

When it comes to the Dancing on the Square project, differences cease to exist, it doesn’t matter where someone comes from – everyone is equal before the audience and dancing to the same music.

If you would like to support the children participating in the event, please click on this link.

Just like in previous years, the Budapest Festival Orchestra will provide several thousand free paper chairs for the audience, which can be taken home or have the conductor sign them after the concert.

Venue and time of the concert:
The square outside St. Stephen’s Basilica, 16 June, 7 p.m.

Admission is free of charge.