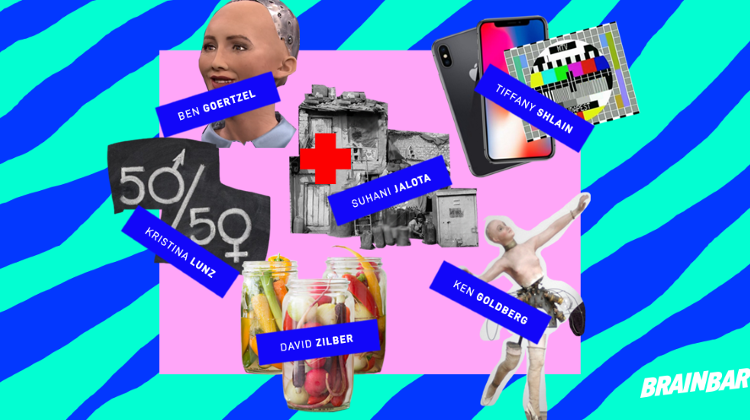 The Brain Bar line-up for 2019 is as impressive as ever, gathering together some of the greatest outstanding thinkers, visionary artists, technology experts and business visionaries from all over the globe in Budapest to discuss and debate what the future holds.

How should we use technology instead of getting misused by it? Can we revolutionize modern gastronomy with ancient methods? Will a robot take our jobs in the coming years? All these questions will be answered at this year’s Brain Bar.

The co-creator of humanoid robot Sophia will arrive to Budapest from Hong Kong. Ben Goertzel, a real super brain not only researches artificial intelligence, but applies it to diverse fields such as linguistics, data mining, gaming and bioinformatics.

Ben is the world’s foremost experts in Artificial General Intelligence, a subfield of AI oriented toward creating thinking machines with general cognitive capability.

What do Jamaican patties and quantum physics have in common? Not much to be honest, but Noma superstar chef David Zilber loves them both.

David is known for his crazy experiments in fermenting, one of the oldest preservation food methods. Besides the dishes, the results of his experiments can be found in the bestselling book, The Noma Guide to Fermentation.

Who said you can’t be a polymath in the 21st century? The Tiffany Shlain-Ken Goldberg couple certainly disproves this myth.

Goldberg, robotics professor at Berkeley developed the first robot on the Internet and exhibited in the Venice Biennale and in the Pompidou Center. Tiffany is an award-winning filmmaker and the family is known for their tech shabbats. This is a ritual in which they unplugged technology for a day every week.

Brain Bar also will be joined by:

Brain Bar will host about 50 speakers: among them a legendary paleontologist, adviser of the Jurassic World series; one of the first female imams in Europe; and a taboo-busting researcher of sextech.

The full list of speakers is available by clicking here.

Venue:
Corvinus University
- the festival is free to attend for students and teachers.