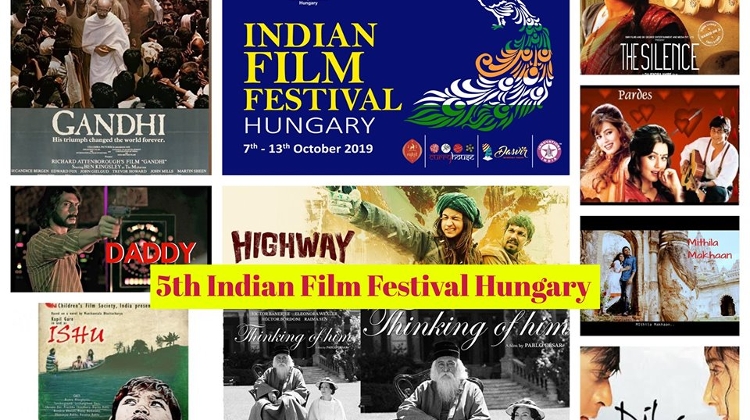 Synopsis of Movies to be screened during IFF Hungary:

Saaho - A man uses an arsenal of weapons to battle a gang of heavily armed thugs in the city. With the city under fire and people's lives at risk, the one man has to give everything he has got to take the city back.

All Is Well - Writer-director Umesh Shukla takes his inspiration from the mythological tale of Shravan Kumar who was known for his devotion towards his parents. Bhalla (Rishi Kapoor) owns a small bakery and wants his son Inder (Abhishek Bachchan) to continue his legacy. But the son has bigger plans. After an altercation with his father, Inder moves out and ends up struggling to realise his musical dream in Thailand.

One day, he gets a call from Chima (Mohammed Zeeshan Ayub), a local hoodlum from his hometown. Inder is promised a lot of money, which is why he returns to his land; only to discover that it’s all a set-up and his father, in fact, owes a lot of money to people around, including Chima.

And thus begins a run-around with Inder having no choice but to join forces with the father he hates to get his family out of trouble. Joining the father-son duo is the Alzheimer-struck mother (Supriya Pathak) and Inder’s love interest (Asin).

Gandhi -  This acclaimed and epic biographical drama presents major events in the life of Mohandas Gandhi (Ben Kingsley), the leader of India's non-violent, non-cooperative independence movement against the United Kingdom's rule of the country during the 20th century.

Dedicated to the concept of nonviolent resistance, Gandhi is initially dismissed by English officials, including the influential Lord Irwin (John Gielgud), but eventually he and his cause become internationally renowned, and his gatherings of passive protest move India towards independence.

Highway - A city girl - young, full of life - is on the highway at night with her fiancé. Suddenly, her life is swung away from the brocade and jewelry of marriage to the harsh brutality of abduction. Her life will never be the same again.

The gang is in a panic; the girl is a big industrialist's daughter, his links in the corridors of power make ransom out of the question. But for the leader of this group sending her back is not an option. As the days pass by, the scenery changes, the girl feels that she has changed as well. Gradually, a strange bond begins to develop between the victim and the oppressor. It is in this captivity that she, for the first time, feels free.

Daddy - From the rough streets and back alleys of Central Mumbai comes the sensational true story of Arun Gawli, a man who scripted his own destiny, eventually going on to become one of India's most feared gangsters. Today he remains an enigmatic figure; at once a volatile, power-hungry criminal for some and the respected "Daddy" or a modern day Robin Hood for the working-class neighborhood he belongs to.

Daddy follows the intertwined fates of the world-weary Gawli as he attempts to enter politics and a frustrated Police inspector with a secret history of his own. An unfolding jigsaw puzzle, told from different points-of-view and spanning over four decades, Daddy is an unforgettable excursion into the Mumbai underworld.

Thinking of Him - Two stories intertwine over the time. In the present, Felix, pessimistic and lazy teacher encounters a book that dazzles him, while he teaches geography in a detention center for minors. In the past Rabindranath Tagore, Bengali poet, author of the book that has come to Felix arrives in Argentina and hosted by Victoria Ocampo, who lives a brief and innocent romance.

Felix, while more and more obsessed with the story of the poet and journalist,  is approaching to the spiritual notions on which Tagore founded a revolutionary school in India. From the readings of the books of Tagore and Ocampo, we go through the events that zoom in and out to these remarkable personalities of world culture that are torn between the love and estrangement.

Sudani from Nigeria - is a 2018 Indian Malayalam-language comedy-drama Sports film written and directed by Zakariya Mohammed. The story follows a Nigerian football player who joins a club in Malappuram, Kerala for the sevens football match.

Dil Se - Amar Varma (Shahrukh Khan), a producer for Indian news radio, meets an enigmatic woman at a railroad station and then again at a hill station. He falls in love with her, but the woman, who calls herself Meghna (Manisha Koirala), rejects and leaves him although she seems to be interested. Later, Varma agrees to marry his family's choice, Preeti (Preity Zinta). But then Meghna is back and there is a secret that she holds.

Pardes - is a story that revolves around Arjun (ShahRukh Khan) and Ganga (Mahima Chaudhary). A running theme throughout the film is also the beauty and worthiness of Indian culture and values, which are often overwhelmed by the perceived desirability of Western culture and values .

Kishorilal wants an Indian bride for his westernised son. He gets him engaged to Ganga, his friend's daughter, and brings her to USA. But she shares a deeper bond with Arjun, Kishorilal's foster son. This film takes a serious look at the lives of Westernized Non-Resident Indians (NRIs) in North America and hence the meaning of the title - "foreign land".

Ishu -  It is based on renowned Assamese writer Manikuntala Bhattacharjya's popular novel of the same name. Ambika, little Ishu's favourite aunt, has gone missing after the evil village quack has declared her as a witch. Will Ishu get her back? The film deals with the demonic custom of witch-hunting prevalent in tribal areas of India and country.

Sholay - Made in 1975, this blockbuster, iconic masala Hindi movie is directed by Ramesh Sippy and written by Salim-Javed. In the village of Ramgarh, retired police chief Thakur Baldev Singh (Sanjeev Kumar) plots to bring down the notorious bandit Gabbar Singh (Amjad Khan) and enlists the help of two lesser criminals, Jai (Amitabh Bachchan) and Veeru (Dharmendra). When Gabbar attacks the village, however, Jai and Veeru wonder why Thakur does nothing to help them. They soon learn that he has no arms, and that Gabbar was the one who cut them off. Enraged by this, they redouble their efforts to help.

The Silence - The Silence is based on a true story and revolves around a little girl Chinni, who stays with her father in Konkan. Life is going great until one fateful day when her loved one turns into the one she despises for the rest of her life. The film is a powerful and heartfelt document of the kind of exploitation that women are subjected to and the trauma and aftermath they undergo in order to regain a healthy sense of self.