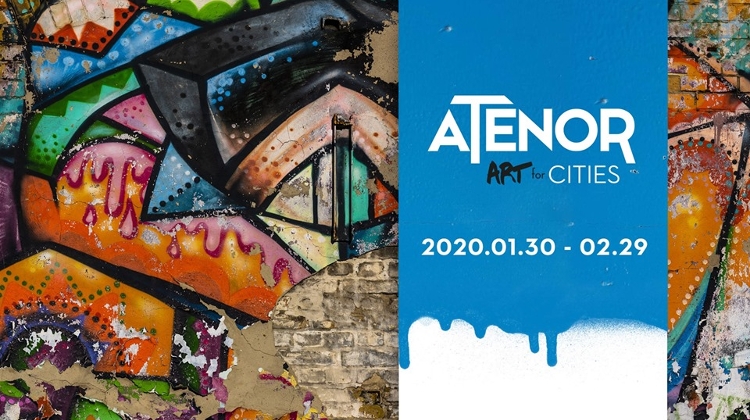 Seen until 29 February @ Société Budapest. Acting for cities is all about beautifying them, breathing life into them and making them attractive to those who live, work and relax in them or who are just passing through.

Keen to move a little further forward in its role as an urban actor, ATENOR has opted to takea sideways look at cities through Street Art. It’s a way of seeing places in a different light, showing neighbourhoods in their present state and imagining their future.

This led to a partnership with the photographer Benoît Feron.

A lawyer by profession, Benoît Feron is also a recognised Belgian photographer. He has brought out several books, and his works have been widely exhibited in Belgium and France.

He has also won a number of prizes, including the best photograph award at the exhibition “L’Art pour l’Accueil”.

Sharing the same passion for cities, their history, their citizens and their evolution, ATENOR and Benoît Feron have joined forces to launch the exhibition “Art for Cities”.

Street Art is an integral part of our cities’ history. These riches have been created by the citizens themselves down the ages. Often hidden and temporary, Street Art tells of the cities’ history and helps to map out their future. It is accessible art, a form of free expression that is within everybody’s reach and which brings life to a city, its inhabitants, its landscape and its architecture.

As a European urban actor, ATENOR wishes to build interest in Street Art and reveal its beauties throughout Europe, overlooked or misinterpreted though they often are by the urban population. Urban art is often the precursor and herald of change in the gestation of a city. It enlivens and transforms abandoned spaces.

Taking part in the evolution of cities and breathing life into neighbourhoods are missions that ATENOR has set itself.  As such, this exhibition was an obvious choice.

To carry out this project, photographer Benoît Feron travelled around the major European cities in which ATENOR is present. Brussels, Luxembourg, Paris, Lisbon, Düsseldorf, Warsaw, Budapest and Bucharest became his investigation scenes and his hunting grounds.

His photos display Street Art from an artist’s viewpoint but also place it in its urban context. So each photograph in the exhibition will be accompanied by a picture and a text that describe its origin and its environment.

And itis at the heart of Europe, in Brussels, that the fruits of this meeting between ATENOR and Benoît Feron will be revealed for this first time. This first show was at the Arthus Galley, a prestigious and highly reputed location in Belgium.

Dedicated to celebrating street photography in the various cities where ATENOR has a presence, the exhibition will subsequently travel across Europe.

From 2020, following Brussels, the cities of Luxembourg, Paris, Lisbon, Warsaw, Budapest and Bucharest will all host the exhibition “ATENOR, Art for Cities”.