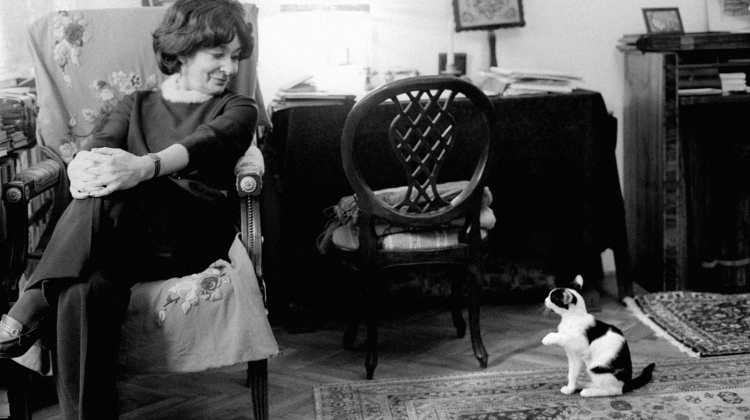 While being the most translated Hungarian author, with publications in 42 countries and in over 30 languages, Magda Szabó, HLO’s author of the month, is always worth a rediscovery.

The recent English translation of her novel Abigail allows us to revisit the oeuvre of the grande dame of Hungarian literature.

Not that she has ever been forgotten, but Magda Szabó is back in the literary limelight thanks to Len Rix’s new translation of her novel Abigail (2020) what The New York Times calls: “harrowing and mesmerising”, and Publishers Weekly deems a “rollicking delight”.

Published both in England and in the US, Abigail, the most popular of Szabó’s books in Hungary, is finally available for the English reading public as well.

Following the successes of The Door (2006) that Literary Hub has selected to be one of the ten best translated novels of the decade, and Katalin street (2017), for which translator Len Rix received the 2018 PEN Translation Prize, Abigail is the third novel in a loose trilogy about the impact of war on those who have to live with the consequences. (Read an excerpt from the novel here.)

Magda Szabó’s own life also echoes the trauma the war brings into the lives of her characters. Born into an old Protestant family in Debrecen, Hungary’s “Calvinist Rome” in 1917, she was raised by her literary-gifted parents, who created a fairy-tale world for her (which was the inspiration for her novels Islands and Lala the Fairy).

She conversed with her father in Latin, German, English, and French, attended the University of Debrecen, studying Latin and Hungarian, then went on to work as a teacher throughout the German and Soviet occupations of Hungary in 1944 and 1945.

Her close ties to her hometown, though severed by geographical distance when she moved to Budapest in 1944, were never really cut. As she later confessed: "There is only one place I never name, this is Debrecen. If I want to go to Debrecen, and when people are asking: where are you going just now, I answer: home.

I have been teaching in Hódmezővásárhely since September 1942, I have been living in Pest since April 1945. Thirty-three years is a great amount of time, enough for Christ's entire life story. It was not enough for me to recognize: I have moved. Homeland, of course, till death, is always Debrecen."

The coat-of- arms of Debrecen with its lamb motif became a cornerstone of her oeuvre, and she built up her own personal myth around her ancestors in her works.

During the war she started to work for the Ministry of Religion and Public Education, and this is when she made contact with the New Moon Group that bound together a whole generation of new poets whose relentless yet authentic new voice would become legendary.

In 1947, she published two volumes of poetry, Bárány (The Lamb), and Vissza az emberig (Return to Man), for which she received the Baumgartner Prize in 1949. At the end of the 1940s the whole group was silenced, and since under Communist rule her early critical success became a liability, Szabó turned to writing fiction: Her first novel, Freskó (Fresco), came out in 1958, followed closely by Az őz (The Fawn).

In an interview with writer János Háy, Szabó summarized the events of the 1950s thus:

“After ’49, it was practically impossible for any of us to publish anything. I first became visible again in 1958. Up until that time a part of this country conspired against letting us make our voice heard. This did not surprise me; I was pretty well informed about politics.

I was the daughter of the one-time cultural councillor of the city of Debrecen. How could I have expected the new communist leadership to like me? I was not one of their ranks. Why would they want me to represent Hungarian literature?”

Proud and faithful to her roots, her novels did not align with the accepted norms of Socialist Realism. In Fresco she writes about a painter who simply chooses the subject matter to work on instead of obeying to what the newspapers tell her to do. She also introduces the first of her many (in her own word) “terrible” woman characters there, who function in rather unconventional ways.

When questioned by Háy about the inspiration for her tough women characters she confessed: “This is the type of woman I kept coming in contact with, throughout my life. If I was near my mother, if I was near my family members, this was the case. No one could call me conventional, either.”

While only tolerated by Hungarian cultural politics, she became an instant hit in Germany, when, following Herman Hesse’s suggestions, the German Publishing House, Insel issued her works.

After the “tremendous lot of attention” her work was given in the German press, Hungarian recognition also followed: in 1959 she won the József Attila Prize. She went on to write many more novels, among them Katalin utca (Katalin Street, 1969), Abigél (Abigail, 1970), Ókút (The Ancient Well, 1970), Régimódi történet (An Old-Fashioned Tale, 1971), and Az ajtó (The Door, 1987).

Probably her best-known novel abroad, The Door, a manifestly autobiographical novel, tells the tale of a long and rhapsodic relationship between two stubborn women, the middle-aged lady-writer Magda and her old housekeeper, Emerence.

As Dóra Elekes writes in her review: “Like most of Magda Szabó’s works, the novel is built around an all-penetrating central metaphor. The denotative part of the metaphor is the door to Emerence’s living room, which she never opens to anyone, only once and only to Magda.

The connotative part of the metaphor is an assertion almost manically repeated by the narrator throughout the book, the assertion that to love someone is dangerous. The door stands for the gate to one’s so-called inner life, which, when opened, makes one vulnerable to the beloved person.”

It is a stirring story of love and loss, of self-delusion and betrayal that, in Len Rix’s translation was named one of ten best books of the year by The New York Times Book Review. In 2012 István Szabó directed a movie version of the novel with Helen Mirren and Martina Gedeck in the leading roles.

Her best known novel, Abigail, an adolescent classic, chosen as the sixth most popular novel in the Hungarian version of the Big Read, is a story of a headstrong teenager growing up during World War II.

There is something of Jane Austen in this story of the deceptiveness of appearances; fans of J.K. Rowling are sure to enjoy Szabó’s picture of irreverent students, eccentric teachers, and boarding-school life. Above all, however, Abigail is a thrilling tale of suspense.

Her success abroad gave her new recognition at home, too, that led to the publication of the final novel Für Elise (2002), an autobiographical recount of Szabó’s Debrecen childhood.

Though never involved in politics, Szabó’s oeuvre reflects a clear dissident voice that favours a bourgeois value system, something that was frowned upon during the years of Communism.

As she admitted to János Háy, this honesty to herself was what she believed a writer should follow:

“A writer must never be involved in politics in the same way as a politician. These are two totally separate things. Writers have a different job to do. It is up to them to make people scared if they have taken the wrong path. A writer doesn’t necessarily need to die for the sake of truth, but they must serve it at all costs. This is what all honourable writers do.”

Szabó also wrote verse for children, plays, short stories, and nonfiction, including a tribute to her husband, Tibor Szobotka, a writer and translator who died in 1982. A member of the European Academy of Sciences and a warden of the Calvinist Theological Seminary in Debrecen, Szabó died in the town in which she was born, a book in her hand.

Although ostracized by the oppressive regime, Magda Szabó’s novels were always avidly read by the Hungarian public, probably also due to her relentless honesty and clarity of voice she described in the following way in 2007:

“I was a natural born fighter. If I had a life before this one, I must have been a soldier. What do you think is the most important thing about a writer’s personality? You must not lie. Even if it means your undoing, you must not lie. You can find the form of expression that allows you to get away with telling the truth, but that is what you must do.

Anyway, in this country, it has always been the writers and not the politicians who have kept people’s spirits up. In the various great epochs it was always the writers who told people what should be done.”