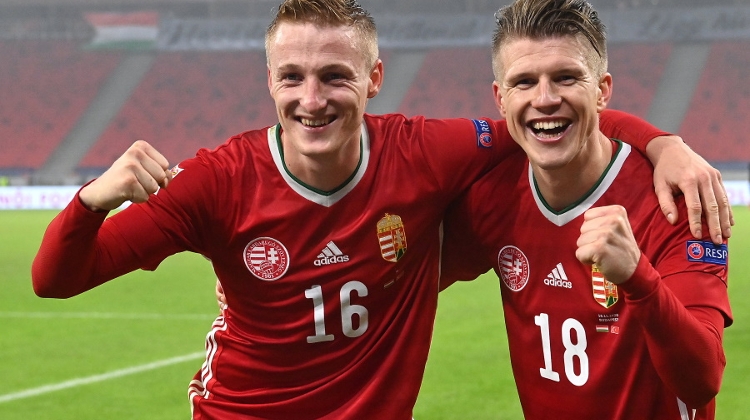 Second-half goals by Dávid Sigér and Kevin Varga, their first in Hungary colours, handed their team a battling home victory against Turkey on Wednesday and, allied with Serbia's defeat of Russia on the same night, first place for Hungary in Nations League group K and promotion to Division A.

The team, guided in Rossi's enforced absence by caretake coach Zoltán Gera and Rossi's erstwhile assistant Cosimo Inguscio, lined up in a 3-4-1-2 formation, Dénes Dibusz in goal behind a defensive trio of Szalai, Lang and Fiola.

Hangya was the left wing-back while Nego was on the right and they flanked a central midfield of Sigér and Nagy behind Kalmár in the playmaker's role and captain Nikolic and Könyves upfront.

It was Turkey had the first serious shot on goal as early as the sixth minute when Calhanoglou's long-range free-kick was collected at the second attempt by Dibusz but, moments later, it was Hungary's turn to threaten when Nikolic hit a speculative effort straight into Turkish goalkeeper Görök's arms from the left side of penalty area.

The game was already set up to be an open affair, Kalmár seizing possession inside the Turkish half in the 10th minute and surging forward, but he ignored Nikolic and Könyves in good positions either side of him and instead elected to shoot, a decision for which he seemed to apologise straight after driving the ball high and well wide of the right post.

Midway through the half, Könyves could have sent Nikolic in on goal but his pass was just too weak and soon after, Nego's low, hard cross only just evaded the outstretched boot of an onrushing Könyves.

Turkey also created moments of danger though, Dibusz doing well to gather a powerful, low drive from Calhanoglou just before the half-hour mark and Karaman working an opening inside the box in the 39th minute, only for his low effort to barely trouble Dibusz.

The visitors' veracity was evident early in the second period too, Tosun turning Szalai inside the home penalty and shooting, but the young Hungarian defender recovered to block the shot and Tufan blazed the rebound well over the crossbar.

That bout of stout defending turned out to be crucial as the hosts capitalised on Serbia's dominance against group leaders Russia in Belgrade by taking the lead in the Puskás Aréna and closing in on the group's top spot.

One half-time substitute, Tamás Cseri, cleverly fed the ball to Nikolic who slid it across Hungary's second replacement Kevin Varga to shoot low across goal.

Günök did well to tip the ball onto the far, right post but recovering defender Kabak's attempt at a clearance cannoned off Sigér and into an empty net as the game approached the end of the first hour.

That goal deservedly put Hungary in the ascendancy and ninety seconds later they almost doubled their lead, the impressive duo of Cseri and Varga combining again when the former crossed from the right, but the latter's shot on the run was blocked for a corner.

Back came Turkey and they exerted some severe pressure in the 72nd minute when Calhanoglou's volley forced a superb reaction save from Dibusz and substitute Türüc's follow-up shot was well blocked by a brave Nego.

Turkey forward Kamaran then sent a shot high over the bar as the away team sensed it wouldn't be their night and their misery, not to mention Hungary's joy, was complete in added time when Varga counter-attacked alone, running three-quarters of the pitch and finished low and sublimely into the far, left corner of the net to seal another excellent night in the Puskás Aréna.

This latest victory places Hungary on 11 points as Nations League Group K in Division B comes to an end.

Russia's surprise 5-0 defeat in Serbia sees them stay on eight points and relinquish first place to Rossi's side, meaning that Hungary will be promoted to Division A for the next edition of the tournament in 2021.