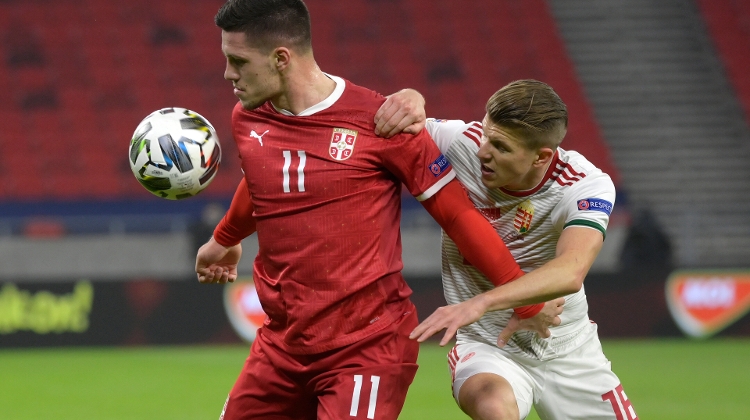 Zsolt Kalmár was Hungary's saviour as his equalising goal cancelled out Nemanja Radonjic's superb run and finish, thus securing his team a point from their penultimate Nations League qualifying fixture against Serbia in the Puskás Aréna on Sunday evening.

Fresh from securing UEFA European Championship qualification in the same stadium on Thursday, Marco Rossi's side - led from the bench by Zoltán Gera tonight in the absence of the quarantined Italian - faced an uphill task once Radonjic had given the visitors a 17th-minute lead but Kalmár's intervention six minutes before half-time was just desserts for an impressively energetic first-half team performance.

Significant changes were made to the Hungary lineup that started against Iceland three days ago, goalkeeper Dénes Dibusz and debutant defender Ákos Kecskés replacing the injured Péter Gulácsi and Willi Orbán respectively, while joining those incomers in the starting eleven were Ádám Lang, Barnabás Bese, Dávid Sigér and Nemanja Nikolic - the latter as captain - in place of Attila Szalai, Attila Fiola, Roland Sallai and Ádám Szalai.

These six alterations were incorporated into an adventurous 3-4-2-1 formation which threatened to pay early dividends, Sigér and Nikolic both skying half-volleys over Serbia goalkeeper Marko Dmitrovic's crossbar when well-placed in the first 14 minutes, while Dominik Szoboszlai looked in menacing mood in his more advanced midfield role alongside Kalmár and behind lone striker Nikolic.

However, Hungary were caught with a sucker punch in the 17th minute when Nemanja Radonic latched on to a flick-on in the left channel, outstripped Kecskés on the defender's first appearance for the full Hungarian national team and cut across the penalty area before skipping past Botka's challenge and sliding the ball back across Dibusz and into the left side of the goal.

Falling a goal behind was the last thing an attack-minded home team deserved and they set about levelling matters with Szoboszlai an increasingly influential figure.

Firstly, the RB Salzburg playmaker's low, long-range free-kick tested Dmitrovic at his near, right post in the 23rd minute, then he advanced towards a retreating Serbia defence and shot just wide of the far-right post a few moments before unfortunately planting a diving header from Nagy's cross straight at the opposing goalkeeper.

Hungary found a way back into the game in the 39th minutes though, Kalmár exchanging passes with Nikolic outside the penalty area before slipping the ball under an advancing Dmitrovic and wheeling away to celebrate with the inimitable Szoboszlai, whose clever diagonal run had freed up space for the Dunaszerdahelyi AC midfielder to burst into and equalise.

Parity was no more than the hosts deserved but Serbia were by no means a spent force, a point ilustrated eight minutes after half-time when Radonjic's diving header was deflected behind for a corner with a wrongfooted Dibusz forced to scramble across his goal to ensure no fresh pain was inflicted.

The impressive Radonjic again went close in the 71st minute when the Marseilles winger surged in from the left and slammed a fierce drive high and just right of Dibusz's goalframe.

The match was now evenly poised but still open, home substitute Norbert Könyves curling the ball into Dmitrovic's arms from 14 metres and Luka Jovic twice threatening to score, firstly with a low shot across goal that rolled just wide and then with a speculative close-range flick from a long ball which Dibusz did well to deal with.

Serbia substitute Gacinovic had the match's last chance to score but Dibusz plunged his left to clutch the deflected shot from inside the penalty area and thus the teams were destined to remain deadlocked, Hungary now hoping they can beat Turkey at home on Tuesday and Serbia take can points from Russia so they can conclude an excellent week's work and win this Nations League qualifying group.