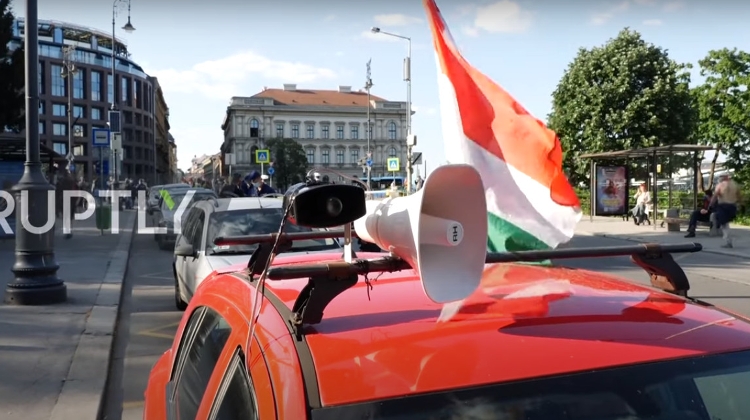 People were honking their cars for the fifth and so far, the last time on Monday 19th May to stand up against the governments’ actions during the COVID crisis.

The protests were organised under Viktor Orbán’s office in the Buda Castle to warn the prime minister to the fact that some people think the Hungarian government is mismanaging the current crisis.

The first protest of this kind was organised on 20th of April by independent MPs Bernadett Szél and Ákos Hadházy, and opposition party Momentum to protest against the hurried eviction of patients to free up hospital beds, ordered by the Hungarian government.

The first protest went without incident, but next week, when protesters showed up again to express their opinions, they were met with a large police presence, and the honking drivers were pulled out of traffic and fined in many cases for an unjustified use of their horns. Bernadett Szél was also charged with misdemeanour.

The policemen were visibly not keen on fining the protestors, and some of them were apologetically explaining to the drivers that they were doing this on the orders of their supervisors.

The third protest has seen an even higher police attendance. The police this time did not check the drivers for breaking traffic laws, but on the suspicion of breaking lockdown rules by leaving their homes without a good reason.

The policemen asked the drivers that were stopped about their destinations, and reminded them about the measures of the current lockdown order, which states that people can only leave their homes with a good reason during the lockdown.

Some protestors responded by saying that their reason was to express their opinions, to which the policemen said that they were not allowed to do that during a declared state of emergency.

On this protest altogether 49 persons were reported by the police.

For the fourth protest however, the police put up street cameras around the square. Ákos Hadházy tried to ask the leader of the assigned policemen where they got their orders for the increased police presence, but he was told to go to the Budapest Police Headquarters’ Press office for information.

One of the colleagues of Bernadett Szél, who was in the same car with her during this protest was fined for 150 000 forints on three charges, one of which was waving a European Union flag from their car.

On Monday, according to the organisers, the last of these events took place under the Buda Castle. The police reported altogether 19 people on this protest, some of them for breaking traffic laws, while others for the violation of the right of assembly. One person was charged with suspicion of assault on a representative of public authority for kicking a police officer with a ball.

Some of the protestors posted their fines on Facebook, the largest known fine for taking part in the event is HUF 750.000 (EUR 2.100).

Earlier Ákos Hadházy told Átlátszó that “After receiving huge fines from Orbán’s police, it is time to add these up and organise our defence measures. But my message to the lord of the Castle is: we won’t stay silent!”

This Monday, however, the protest was cancelled due to the astronomical fines handed out by Budapest police. Hadházy is organising a crowdfunding campaign to reimburse those who were fined.